Besides our obvious needs for a Safety or CB, we also need a lot of help in our linebacking corps. As we all know, last season, the only reliable LB on our team was Jelani Jenkins. Philip Wheeler was underwhelming, as he has been since he’s been here, and Koa Misi was average to good when he was healthy, but as we’ve seen with him, he has trouble staying on the field.

I’m going to look at some OLB prospects, some who actually project better at 3-4 OLB or 4-3 DE, and some who project both as ILB and OLB.

Fowler is basically the best OLB prospect in this draft. He has the size, speed, and production to make that so. He’s played DE and LB, and dropped 25 lbs to his current weight of 260. He projects best as a 3-4 OLB, but you know how it is with those projections. Just give me talent, and we’ll find a place for ya!

Fowler made 60 total tackles, 29 solo, 31 assisted. He had 8 sacks, 15 TFL, 2 FF’s, 1 FR and 17 QB hurries. NFL.com’s Lance Zeirlein has Fowler rated highest at 6.39. The AFC East college director of scouting said this . . . “He’s had to play at different weights and different spots on the field, and I think he’s finally understanding how to use his athleticism to dominate a game. He will be way better in the pros than what he is now.”

Beasley is another top prospect, and outside linebacker. He goes a little lighter than Fowler, but keep in mind Fowler was playing all over the D-line and dropped 25 lbs to get to 260, so Beasley is right about where he should be a 4-3 OLB.

Last year, Beasley racked up 34 total tackles, 28 solo, 21.5 TFL, 12 sacks, 2 FF’s, 1 FR. Beasley did a lot if damage behind the LOS last year. Beasley is a 3 sport athlete, track and field, Football and Basketball. He’s a former running back who has quick feet and fluid hips, excellent pass coverage traits, and posses a great closing burst. He projects as 3-4 OLB, but an NFC Scout said this . . . “I know everyone will have him pegged as a 3-4 edge guy, but I think 4-3 defenses would be crazy not to consider him as a WILL or SAM who can bump down as an edge rusher in third downs. Denver does it with Von Miller, so why not consider it?”

Zeirlein has Beasley ranked 2nd at 6.08

Dawson is a guy that projects both inside and outside in the NFL. Very instinctive player that is quick to diagnose and read the play. Excellent in pass coverage and true sideline to sideline defender. Dawson allowed only 35% of the passes in his area to be completed.

Dawson had 136 tackles, 81 solo, 20 TFL, 6 sacks, 2 FF’s, and 4 INT’s, one returned for a TD. Dawson averaged a tackle every 5.3 snaps and either caused or recovered 8 turnovers during the season. Sounds like just what we need here! Zeirlein ranking 6.0

Thompson is a superior athlete that has played a few positions in CFB. As a RB, he gained 456 yards averaging 7.5 YPC. He’s played safety and linebacker. Very fluid athlete with excellent speed and closing burst, really has a 2nd gear. One minus is his difficulty maintaining weight. He’s struggled keeping his weight up, which would make him too small to play LB, and would force him to play safety. He projects as a weak OLB or S in the NFL. As Thompson says though, “I want to put it out there – – I’m a linebacker”

An AFC North scout said this . . . “He was 219 pounds when I visited late in the season. I’m concerned about whether he will be able to keep enough weight on to be a 4-3 WILL. Until I see him actually play deep as a safety, I’m not sure that is a projection I’m comfortable making.”

Zeirlein gives him a 6.0 rating

Dupree projects as a 3-4 OLB. While he’s not an ideal fit for a 4-3, I’ll include him because of his talent. Very powerful football player and a very good athlete. Very explosive athlete with an excellent closing burst. Very high character player. He can set the edge with his strength and has shown ability to cover. Excellent pass rusher, which is why he projects well as a 3-4 OLB 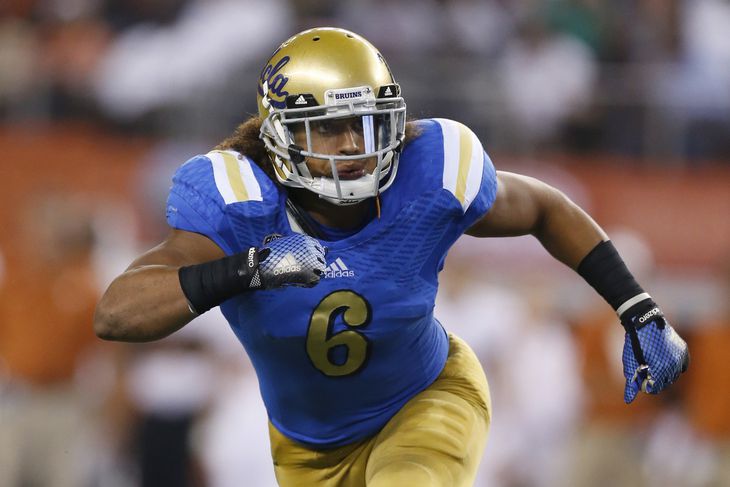 Kendricks is an instinctive LB, and one of the most productive tacklers at LB in CFB. Excellent character and a good athlete who is always around the football. Kendricks is also a leader, a good trait for a team like ours who doesn’t really have one on defense.

Zeirlein ranks him at a 5.78, mostly because he didn’t make a lot of plays behind the LOS. Otherwise, a very productive player.

Thickly built, stout, prototypical ILB build. Lays the lumber when he hits. Sheds blocks well, and plays low, and keeps his eye on the target. Very physical player. Not very fast and doesn’t move specially well. Is a liability in coverage.

Anthony is a well built LB. Very consistent and reliable tackler. Plays faster than he times. Competes through to the whistle. Does not shed blocks well and uses poor leverage to disengage. Is a liability in coverage. Doesn’t have good closing speed. Not very instinctive.

Hicks is a very smart player, and he loves the game of football. Prepares well for games, has superb character. Not very instinctive and doesn’t diagnose plays well. Very good tackler, rarely misses one.

And NFC scout said this . . . “Hicks needed the discipline that Charlie Strong brought with him. I saw enough improvement this year to give him a much higher grade than I had on him back in September.”

There are other prospects of course, and we may very well end up taking none of these guys, and maybe we’ll take someone else.  I think one of these is likely to be a target at least for us, but whether we actually draft any of these guys remains to be seen.

Let me know who your favorite is, and if there was someone I should have added, please post something on the blog about that player.  Thanks, and enjoy!

338 Responses to Walk the Line-backers