I grew up in Brooklyn New York in the 1960’s. New York City, which is comprised of the 5 boroughs of Manhattan, Bronx, Queens, Staten Island and Brooklyn, was decidedly a baseball town. The New York Yankees had a firm grip on the majority of baseball fans, but the upstart Brooklyn Dodgers won the hearts of many fans as well, especially those from the borough of Brooklyn. My dad was a huge Brooklyn Dodgers fan, but those Dodgers broke his heart, and left Brooklyn to go to California and became the Los Angeles Dodgers. The New York Mets became the “other” baseball team in NY, but my father, who hated the Yankees, as any Brooklyn Dodgers fan would,  instantly fell in love with the New York Mets. I was actually born about 5 minutes from Shea Stadium, which was in Flushing NY, in Booth Memorial Hospital in Jackson Heights Queens. The Mets of course now play in Citi Field, only a few steps from where the once beautiful Shea Stadium resided.

OK, enough about baseball, and why even bring it up, right? Just to give a little background about which sport was biggest and had the city’s hearts. My dad was a NY Jets fan. He watched games, but I never felt the passion he had for the Mets when he watched football. I am, and always will be a huge Mets fan, it’s in my blood. Thankfully, I didn’t catch the Jets transfusion, my poor older sister was stricken with that. 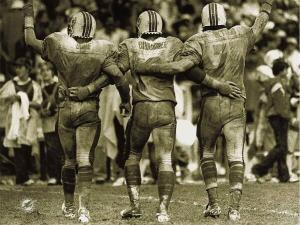 So, one day in the fall of 1972, my dad was watching a football game on our RCA 19” color TV (Which was a big TV in it’s day) in his favorite chair, and although football to me was playing in the schoolyard and knocking the stuffing out of each other, I didn’t know any players or any teams at age 9, and I certainly didn’t know any rules other than destroying the kid that had the football. I walk over and sit down in the “M” position on the floor, (which if I tried to do now, I’m pretty sure every ligament in both of my knees would explode), and started watching the TV. I see one team is wearing these green uniforms, and the other team was wearing these colorful greenish-blue and orange uniforms. Then it happened. The totally inconsequential moment that turned me into a Miami Dolphins fan. That interesting colored uniformed team scored a TD, and I didn’t know any of the players on either team, and after they scored, they kicked the extra point into this pool behind these big yellow posts, and this dolphin swims up to the football, puts it on it’s nose, and swims on it’s tail and then “throws” the football out of the pool.

I was hooked! I thought that was the coolest thing ever. I wish I could say it was a Csonka 40 yard TD run in which he maimed 5 defenders on his way to the endzone, or a Dick Anderson INT that sealed a victory, or a Manny Fernandez sack in which he tore the head of the opposing QB was the moment that made me a Dolphins fan, but it was “flipper” in his pool, doing his thing, and yes, it had nothing to do with the game at all.

That’s what started my love for the team. My best friends in my youth were all fans of teams NOT from NY. Rob was a Cowboys fan, Mitch was a Vikings fan, Randy was a Raiders fan, Scott was a Steelers fan, and that’s the way it was.

Living in Brooklyn, without the advent of DirecTV, seeing the Dolphins play on TV was rare, and it really wasn’t until the late 70’s, when I was in High School, that I really started following the Dolphins closely. This was before the divisions were realigned, and we were involved in battles for the division with the Baltimore Colts, the Bert Jones led Colts. It was 1977, the final year of the 14 game schedule, and we were tied with the Baltimore Colts at 10-4, but lost the division due to the fact that we split with the Colts, but the margin of victory for them was greater, they won 45-28, and we won 9-3, so on to the playoffs went the Baltimore Colts. They lost 37-31 in OT to the Oakland Raiders in the playoffs.

A few years later, another big moment occurred that affected my fandom. I look back on this particular moment in my life, and although I don’t believe in karma much, I think this was a karma moment. I had never before, and never since, gone to a college football game. My dad’s cousin called my dad in November of 1981, and told my dad he had tickets to see Rutgers vs Pittsburgh, for the game on Saturday of November 7th. My dad said yes, so I went with my dad and his cousin Marty to my first and only college football game. Rutgers vs Pitt. OK, I can’t fool you guys and girls, you’re too smart for that, but Dan Marino was the QB of Pitt. In that game, played at the Meadowlands in East Rutherford NJ, Dan Marino dazzled me, torching the Rutgers Scarlet Knights 47-3. I was in awe of that QB, who slung TD after TD, and it was electric. It was a bitter cold day in November, 31 degrees, winds gusting to 34 MPH. I was wearing tan corduroy pants, and my dad’s cousin got me a hot chocolate, and some dude needed to get up in our row, and accidentally bumped me, and spilled the hot chocolate on my pants, and I recall about a half an hour later there was ice in the grooves of the corduroys.

The 1983 draft came around April 26th, and yes, even back then, I was really into the draft. I didn’t study players like I do now, because the information wasn’t available, there was no internet yet, but I always watched the draft. Well, 5 QB’s were taken in that 1st RD, 4 BEFORE Dan Marino! John Elway was the #1 pick, then the KC Chiefs selected Todd Blackledge at #7. The next QB off the board was Jim Kelly to the Bills at #14, followed immediately by Tony Eason at #15. Then the 3rd AFC East team selected a QB, the New York Jets selected Ken O’Brien at #24. I’m going to be perfectly honest with you, I was not even thinking about the Dolphins getting Dan Marino. Not even when the Raiders were up at #26, and even though Jim Plunkett was their starter, I just felt that someone was going to have take Dan Marino before we did. I thought about that Rutgers game where he filled the sky with footballs and lit up the scoreboard, and just knew someone was going to pick him. When the Raiders took Center Don Mosebar, I didn’t move from my seat. I didn’t think it was actually going to happen until it finally happened, and we selected Dan Marino, QB Pittsburgh at #27. My dad was home, but not watching, and I remember running through the apartment to find him to tell him that the Dolphins got Dan Marino. I was giddy as can be, like a HS graduate who’s parents just bought him a new Corvette! 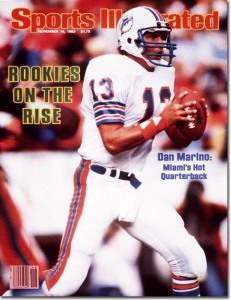 I skipped a little bit in the history, because the Rutgers game tied so well into the ’83 draft. Let me just go back a moment to 1982. Now a full fledged Dolphins fan in NYC, I remember seeing the famous “Snowplow” game”. The Dolphins were caught in a snow covered field in which neither team could score, until that is, the Patriots drove the ball to the Miami 15 yard line, and with 4:45 remaining in the game and 4th down, Patriots head Coach Ron Meyer called time out, and went over to snowplow driver Mark Henderson to ask him to clear a path for placekicker John Smith (Sounds like a Patriot name eh?). Everyone thought that the plow was just going to go straight across the field to get a good spot and verify what yard line the ball was being kicked from, but instead of just going straight across to mark the spot, Mark Henderson (Convict Snowplow Driver) veered left to give the kicker not only a clear spot for the ball, but a clear approach path to the ball as well, and Smith promptly deposited the kick through the goalposts, a 33 YD field goal which proved to be the only score necessary to give the Patriots a 3-0 victory in a bizarre fashion, in a bizarre season, a strike shortened season where the Dolphins won the division with a 7-2 record.

My mom and my grandmother owned a travel agency from 1969-1989 in Brighton Beach Brooklyn. We had senior citizen groups that spent the entire winter in Miami in a few choice hotels that accommodated with special winter rates. My dad worked for the city of New York, practically 7 days a week, and had so much vacation time, he sometimes went to Miami for 2 weeks at a clip to check on the groups, and make sure our customers were being well taken care of.   On my winter break from school in 1983, my dad asked me if I wanted to go to FLA with him for a week. I happily accepted his offer, and off we went. Now while we were in FLA, I knew the Dolphins were going to be playing the Saturday before I had to leave, but I never for a second thought that was ever part of the plans. My dad was the greatest, he really was. I sit here with tears in my eyes as I type this, but on Saturday morning January 8th, my dad asks me during breakfast if I would like to go to the Playoff game against the Patriots. I almost jumped through the roof with excitement, but then reality set in, and I said “Dad, we don’t have tickets”. My dad said we’ll drive over to the stadium, and see if we can buy some tickets off a scalper at the stadium. We ended up getting tickets at a relatively fair price, I think $36 per ticket. We were at the top of the Orange Bowl, but dammit, we were there! It was between 70 and 77 degrees, and I’m pretty sure I watched the game wearing a t-shirt, which I took off and was waving like a towel at some point. I loved the crazy signs I saw, a lot of red circles with the slash through it over pictures of a snowplow, which was known by Dolphins fans as “The NO snowplow” game. David Woodley was almost perfect, completing 16-19 for 246 yards, and 2 TD’s, 0 INT’s. Andra Franklin ran over the Patriots for 112 yards on 26 carries, and Tony Nathan added another 71 yards on 12 carries. A thorough ass-kicking and a 28-13 victory in the Wild card round of the playoffs. This, by the way, was my very first Dolphins game, and I thank my dad with all my heart, yes, my dad the New York Jets fan, for being such a great man, and taking me to see that game.

Two other important things kept me connected to my favorite team, the Miami Dolphins, and I feel the need to pay homage to those vehicles. 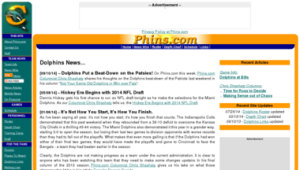 I could go on forever about special moments that have perpetuated my love for the Miami Dolphins, there are so many more, but I sense some of you have fallen asleep already or have plunged your samurai swords into your midsections for an honorable death, so I’ll end this here and now, in the hopes to save some of my fellow Dolphins fans. We just got Suh dammit, and we’re on our way BACK TO THE PLAYOFFS!!! That’s right, I SAID IT!