A closer look at the Miami Dolphins RB’s

I think it’s very fair to say Lamar Miller is under appreciated here. Lamar Miller has been with the Dolphins for 3 years, and in those 3 years, he only has 444 rushing attempts. He has a 4.6 YPC average overall, but last year, Lamar averaged 5.1 per rush, with a season high for him 216 carries and 1099 yards. Miller also had 38 receptions for 275 yards, giving Miller a nice total of 1374 yards from scrimmage, with 8 rushing TD’s, and 1 receiving TD.

Guess what! The last RB in an aqua,orange and white uni to rush for over 1000 yards was Reggie Bush in 2011 with exactly the same amount of carries as Miller, 2 less rushing TD’s. Bush had a 43 receptions for 296 yards and 1 TD, for a total of 1382 yards from scrimmage. Remarkably similar production from these 2 backs, and I think Miller is on the rise, definitely trending upward.

Lamar Miller hopes for more catches and broken tackles
By Reginald James, Dolphins Correspondent, Fri, Apr 3rd 3:38am EDT
After spending time in the film room, Lamar Miller came to the conclusion that he didn’t catch enough passes, and that he needed to break more tackles. This offseason he has put on seven pounds of muscle, and now weighs 225 pounds. Miller has been training with the Jugs machine, and has sought to improve his technique by working with fellow Cane, Andre Johnson. He has also been working with his own QB, Ryan Tannehill, and the Miami receivers.

Miller is a quality guy. He’s a 24 year old RB with not a lot of mileage on his legs, along with the fact that he obviously is looking to improve, and is working hard towards that goal.

Behind Miller on the depth chart, at least at the moment, is 2nd year RB Damien Williams. Williams saw limited action, at least until the end of the season. Williams finished with 122 yards on 36 carries, for a 3.4 YPC average. He was more involved as a receiver, catching 21 passes for 187 yards, and 1 TD. I think Williams showed he’s a dependable receiver out of the backfield at the least, and possibly a decent change of pace back.

LaMichael James is next on the depth chart. James was drafted in 2012 by the SF 49ers #61 in the 2nd RD. James has 4.45 speed, and a lot of wiggle. He was unable to get significant playing time with Frank Gore and Kendall Hunter in 2012 logging in only 27 carries for 125 yards and a 4.6 YPC average. James was primarily used a punt returner, and averaged a decent 10.9 yards per return. He’s obviously a talented back, but hasn’t been able to show in the NFL why he was worthy of being drafted #61 overall in 2012. Hopefully he’ll surprise us this year.

Last on the depth is Mike Gillsilee, our 5th RD draft pick in 2013, 164th overall. Gillslee, like James hasn’t really had a chance to show what he can do on the NFL level, and last year, he was on IR.
So as of now, behind Lamar Miller, we have a fair amount of question marks, although there is definitely talent back there. Williams definitely made things happen in the passing game, and I expect more from him this year. I also expect LaMichael James to be given ample opportunity to make the team. Gillislee has his work cut out for him, because I’m sure if we don’t draft a RB, which even if we do, it will likely be in the later RD’s, we will bring in some undrafted free agents he will have to pass, and Damien Williams, (2014 UDFA) already has passed Gillislee on the depth chart. He will have to have a strong camp and preseason to make the roster. 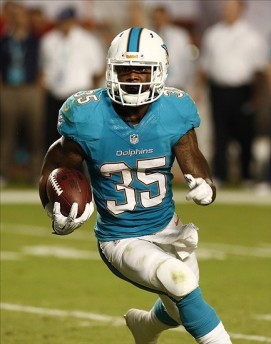 Is there a chance we draft a RB earlier than the later RD’s, or maybe just pick up some UDFA’s? Sure there is. Is there a chance we make a big splash and land Todd Gurley, arguably the most talented RB in this draft (when healthy)? Sure, but I’m not expecting that to happen, not with holes on the OL, CB, LB, WR and S. Not that Gurley wouldn’t change the entire complexion of our offense, he would, but IMO, you still need the horses up front to get it done right. We still have protection issues, and when Albert was injured, our run game regressed significantly as well. We can’t afford that, and I also think it would be foolish to expect Branden Albert to be completely recovered, healthy, and ready to start game 1, if even the first 4 games, after tearing both his ACL and MCL in his right knee. That’s why I think it’s essential that we address the O-line with a player that can both be starter at OT/OG. That’s a lot to ask, and despite what some people think, those guys aren’t usually found past the 1st and 2nd RD. I know you’ve heard it 100X if not more, but the Dallas Cowboys fixed their O-line by drafting Zack Martin last year at #14, and he completely solidified that O-line. DeMarco Murray was never better than last year. On many runs he wasn’t touched until he was 5 yards downfield.

We need to run the ball well, and we need to protect Tanny a lot better than we did last year. Obviously the answer doesn’t lie in FA, although there will be FA after the draft, and if a couple of guys that are available now, like OG’s Stefen Wisniewski, Justin Blalock, and C Chris Myers, and OT’s Anthony Collins, these players will probably have their phones ringing after the draft is over, and teams that were unable to fill spots on the O-line adequately via the draft will be calling. Honestly, I hope we’re not one of those teams, but in Hickenbaum We Trust!