A Look at our Cornerbacks

Brent went undrafted coming out of Shippensburg University in 2006. He was allocated to the Hamburg Sea Devils of NFL Europe, in which the Sea Devils won the Championship. Grimes then signed on with the Atlanta Falcons in 2007. In his 6 year career with the Falcons, Grimes established himself as one of the better cover corners in the NFL, with 13 INT’s in 4 years. In 2010, Grimes had finally become a full time starter. In 2012, Grimes suffered a torn achilles, which led to the Falcons letting Grimes become a free agent.

Jamar Taylor was drafted out of Boise St. in the 2nd RD of the 2013 NFL Draft, pick #54. Very fitting I’d say, if any of you are old enough to remember the TV  sitcom “Car 54”, and the famous line “Car 54, where are you?”. Dolphins fans can easily mutter “Pick 54, where are you?” Since being drafted relatively high, Taylor has only played in 21 games, and has only started 3. BTW, this is the Vontae Davis draft pick we received in the trade with the Colts.

In 2 seasons, Taylor has 34 tackles. When drafted, Taylor came in injured (Sports hernia). Were any of Ireland’s early picks healthy in that draft??? Dion Jordan and Jamar Taylor, the very first picks were damaged goods, and we’ve been suffering through this for 2 years now. 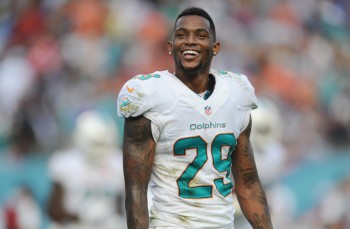 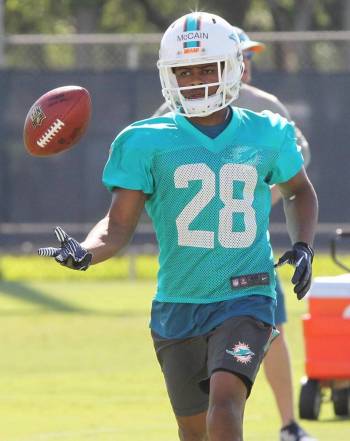 Bobby McCain, named after the famous song “Me and Bobby McCain” was drafted by the Dolphins this year in the 5th RD (145th pick). McCain is of similar size and stature to Brent Grimes. McCain is expected to compete for the nickel (slot CB) position with Brice McCain. 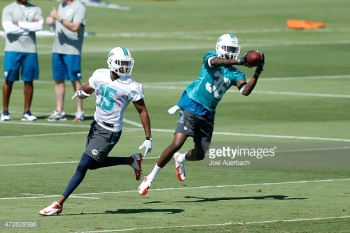 The Incredible Mr. Lippett was drafted by the Dolphins in the 5th RD (pick #156) (seems like a lot of our CB’s were drafted in the 5th, right?)

Tony Lippett is an interesting player. He starred as a WR at Michigan State, and had a very successful Senior year, with 65 receptions, 11 TD’s and 1198 yards, good for 18.4 YPC. Lippett also played some at CB, but didn’t register an INT in his time there. When the Dolphins drafted Lippett, he was drafted to play CB, not WR. In his first action in OTA’s, Lippett burst onto the scene and opened up plenty of eyes, with 3 INT’s! He has the size the Dolphins really wanted (6’3”), as we currently have a lot of CB’s 5’10” or smaller. Whether Lippett starts immediately is not important, but he will definitely be getting plenty of reps to see what he can do, and I wouldn’t be shocked if no one else steps up and grabs the job, that Lippett gives everyone a run for their money.
______________________________________________

In summation, I’d say we have a nice mix of veteran CB’s, and some young guys who can make a difference. Brent Grimes at 31 is still a top NFL CB. The big question is WHO STARTS OPPOSITE GRIMES?

Between young vets like Jamar Taylor and Will Davis, older vets like Zack Bowman and Brice McCain, and the newly drafted Tony Lippett, someone has got to just step up and make it clear the job is theirs. Last year we picked up Cortland Finnegan late in the offseason, almost an afterthought, and he never looked back. I’d love Jamar Taylor to finally emerge, or Will Davis, so we have a young player that can grow with the team. I can’t lie, even though it was just OTA’s, I can’t stop thinking how great it would be if Lippett stole the job. He has the size we could definitely use, and he most certainly has the ball skills as an accomplished WR, so ideally, if it were Lippett, I’d be ecstatic. It can happen, especially knowing the history of Taylor and Davis, and their inability to stay on the field. Of course, it could be Zack Bowman or Brice McCain too, but like I said, it’s about time for a young CB that we drafted to step up and take the reins, and become our long term starter! GO LIPPETT!

328 Responses to A Look at our Cornerbacks