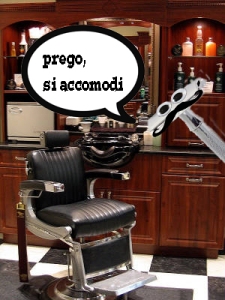 Mustachio hears you picked off three passes in practice uno day.  Mustachio thinks to himself…possibile that Antonio be a better cornerback in the NFL than a receiver?

No offesa Antonio but the Dolphins already have Parker, Landry, Stills and Jennings.  At best you gonna be cinque on the depth chart…but at cornerback maybe you can develop into the next Richard Sherman…

The Dolphins already assigned you the number #36.

And those tre interceptions.  They giver Mustachio sperare about our defense.  Imagine if our coaches made Antonio into an elite cornerback…Mustachio is dreaming now…no?

No Mustachio is no dreaming!  e vero!  Let me tell you about a story Antonio.  A story about one of Mustachio’s great ancestors:  Marco Mustachavis, a great General of the Roman Army.

Many generations ago, Marco was uno Roman General ottimo! Marco had two sides to him: a knife he used to carve up the barbarians he faced and a little screw he used to torture the survivors.  “Ah the spoils of victory” the other Romans disse about Marco.

The Roman Senators disse to Marco.  “Amare Marco everyone.  He can be used two ways:  To fight and to torture.  No one else is like Marco!”

But at night Marco cries and cannot sleep.  All the fighting and especially torture make Marco triste.  Marco throw rocks in the ocean instead of sleeping…

One day while conquering a neighboring hoard, Marco stumble onto a peasant crushing grapes.  Marco disse to the peasant – “Why do you smash the grapes?”  The peasant disse to Marco…”to make wine but I must drink the wine, because I have no place to store it”

So of course, Marco kill the stupid peasant

Marco takes vino and puts it in a bottle.  Then he puts cork in it.

After the battle is over Marco brings the bottled wine to the Roman Soldiers and disse “Let’s Partito!”

But no one can get the cork out.  So Marco looks at the bottle and disse “Vino, if you do not release, I will torture you with my toturing device”

Suddenly everyone realize that Marco is a corkscrew who happens to be a knife too.

No more war.  No more battles.  No more toture.  And especially no more crying for Marco!  Only Vino!

From that day on the Roman Empire stop fighting.  They just drink vino instead!  Some say that is what ended the Roman Empire and blame Marco for the end of the empire.  But Marco non importa!  Marco drunk now!

So of course Antonio, it ha senso.  If the Dolphins convert you to cornerback, the New England Empire will fall and all Dolfans die drunk and happy…

Hey Antonio where you go?  Mustachio not give you a mustache yet…