With only one pre-season game left and another 11 days until gloriously the new season starts I thought I’d tell you about my Dolphin porch and what I want to do with it. We actually didn’t set out to make the porch a Dolphin porch,

not sure why not actually, but it all came about as a result of re-purposing an old mirror that has a frame around it to make it look like a window. When we decided to use it my wife said, “hey let’s paint it teal”. So the Dolphin in me said, “well shit if we’re going to paint it teal we may as well use the official Dolphin color.” She agreed and I painted it on there and there was only one thing missing – Dolphin orange. Even though I didn’t put any orange on the mirror I did decide to paint a new wood framed door with it. And in my world painting wood is sacrilege; I could only ever paint wood with Dolphin colors otherwise no way. Anyway so here we are with a Dolphin porch and in need of more Dolphin stuff for the porch.

ago and I came up with an idea that was inexpensive and easy. I went into my picture files and chose some pictures that I took myself at the stadium and had them made into 5 x 7 prints, put them in dollar store frames and mounted them on the wall. Not just mounted but I put them up with a nail gun, that was fun, just held a level there and bam bam bam – done.  I only did 4 and now I want to add a bunch more there. There’s plenty of space. 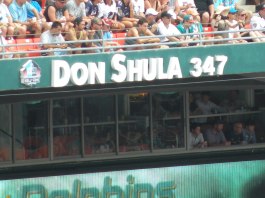 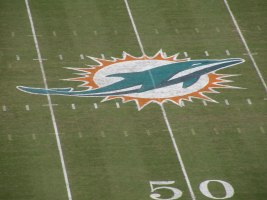 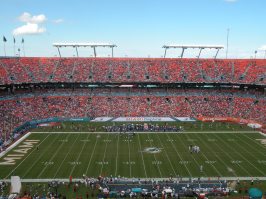 You may recognize the last one it was my avi for a while and if anyone has the Herd T-shirt that’s the avi used for me on it.

There are several shots I want to get at the fest this year, especially with all the renovations but I have several more that I’m going to

add that I already have . They include  Csonka and Marino’s Ring of Honor pics, more pics that reflect the old look of the stadium both inside and out. Of course I need to find each years group fest pics that I want to add. And the Cheerleaders (got plenty of pics of them).

As far as the pictures I don’t have, I have a list. I want the pic of Manny Frenandez’s name on the ring of Honor as he was finally inducted  last year. He’s always been one of my favorite all-time Dolphins. Same for Garo, I want a pic of his name (RIP). I want a picture very similar to above, looking across the stadium,  but it of course will show the new aqua seats. Perhaps pictures of some of the new fancy sections but I also want some of the corners where they removed seats so I can have a progression of old,  new in waiting and then next year with the screens in. 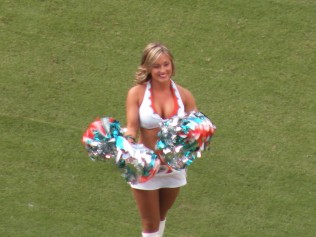 SUH, I want a real cool pic of Mr. Suh. If at all possible I want to try and get a pic of that front 4 standing together. One of those pictures that is reminiscent of the old Steel Curtain or the Purple People Eaters shots you see all the time. I’ll have to super zoom and find an opportune time to snap a shot. That would be awesome to have a picture of Vernon, Mitchell, Suh and Wake that I got myself.

Oh yeah and there’s a rule: I will only put pictures out there that I took myself (or if wifey did) only exception will be the annual Fest pic.

Suh is here, everything is different now!

Only a week and a half folks, we can make it! 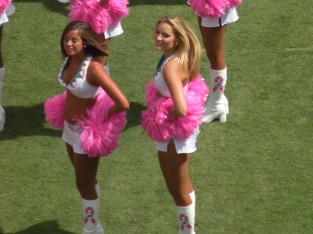 Hanging pictures on the wall can be a real pain in the ass at times making sure you get the nail in the exact spot and then trying to hook that stupid little ring on it. Using the nail gun to hang pictures was quite liberating…and easy!

Oh – the door is Fir so I didn’t paint some nice Mahogany or Walnut or something like that. I’m not that insane.

473 Responses to I Want Pictures