This past Sunday was the most enjoyable “Dolphins” Sunday in so long, I can’t even remember the last one that matched it. I felt like we had a chance to finally beat the Houston Texans, who we were previously 0-7 against. I felt the team had a renewed attitude, and that this might put them over the top. I picked the score of MIA 24 – HOU 6. Who would’ve thought they far exceeded that, and just in the first half!

For the Texans game, a bunch of people from our blog met up for the annual “Fest”, which has become a yearly tradition. I think it’s great, I’ve been to two, but every year I truly miss it when I can’t make it. Jon “Stanger”, is a huge reason for this. The first time I made my way to FLA with my family, Jon, Walker, Gigi, Son, Randy (OD), David, Cap’t Stubbs and Rob (FFR). As has now become the tradition, the whole crew goes out to Dave and Busters for dinner, and Jon always is very kind to provide for whoever chooses to make it there. Honestly, you couldn’t ask for a nicer, better “host”.  John (Son), has mentioned it, and so have some others, but Jon (Stanger), really goes out of his way for all those visiting either from far away in-state, or from even farther away out of state. Anyone who has attended knows this, and major props go out to Jon for doing that. The next time I went I got to meet a few other blog favorites, such as Bat, Diggs, Jahn, and also Ken and Jordi (Piggy), whom I’d already met a few times, but you get the point. If you can somehow make it to one, I highly recommend it, and I personally guarantee my attendance next year. Look forward to enjoying another weekend with some great folks, and meeting some people I haven’t yet met! 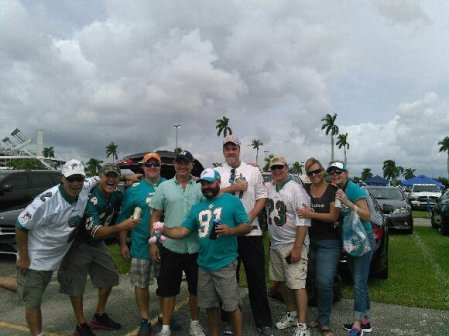 What a game our friends got to see! I just kept imagining what was going on with our friends who made it there this year, how crazy they must have been going, to witness total domination from our team, the Miami Dolphins. They played the best half of football I’ve ever witnessed by them, hands down. Ryan Tannehill was nearly perfect. The defense was ferocious and relentless. Jarvis Landry played like an All Pro WR/KR/PR FOOTBALL PLAYER. Landry is easily my favorite Miami Dolphin, he plays harder than any player IMO. Lamar Miller was fantastic, both rushing and receiving. Rishard Matthews continues to add to his resume, showing what many of us thought he could be, and making it happen. Reshad Jones continues his All Pro campaign, making tackles all over the field, and adding another pick-6. Suh gave us 6 tackles and 2 sacks. Cam Wake, healthy and rabid, gave us 2 sacks. Everyone just looked better. Thank you Dan Campbell, for stirring this team, and waking them up from their slumber. Forget the 2nd half, it was obviously Campbell not only taking his foot off the pedal, but putting it in PARK, and allowing our guys to rest, knowing we have a big game on Thursday night against the Patriots.

Speaking of Thursday night, this is a huge game against a division rival. Last weeks huge win served only to keep the season afloat, and energize the fan base. We need another massive effort from our team, in order to knock off the favored New England Patriots, in their house, Gillette Stadium in Foxboro. The 6-0 Patriots will likely be allowed to hold Wake, and now likely Suh too, so we’ll need some of the other guys to step up. The Patriots have scored the most points in the AFC, with 213, and are 2nd in the nFL to the Arizona Cardinals, who score a lot of points with their defense. This is a daunting task, and at 3-3, and 0-2 in the division, almost a sure necessity, if we plan on contending this season. Brice McCain, who will be the starter if healthy, is questionable to start opposite Brent Grimes right now. If McCain can’t go, Jamar Taylor will start. That would leave young Bobby McCain as the nickel corner. This is big. The Patriots employ those super-quick, pesky WR’s like Julian Edelman, who BTW made Wes Welker expendable. Danny Amendola, finally healthy, is having a good season. Of course, Tom Brady’s favorite target is big #87, Rob Gronkowski.

I won’t be shocked if we if we see a big dose of RB LeGarrette Blount, and also a good amount of  RB Dion Lewis out of the backfield, who will be a game-time decision for the Patriots with an abdominal injury. We need to tackle, and that means Blount, Lewis, but more importantly, Edelman, Amendola, and Gronkowski. The greater majority of passes that Edelman and Amendola catch are only about 5-10 yards past the LOS, so we need to be right on those guys as soon as they catch it, and hopefully, not let them catch it.

Big task for new Head Coach Dan Campbell, to go up against Bill Belichick. All the odds are against us, but I think we may just see a big upset. I don’t expect us to do to the Patriots what we did to the Titans and especially the Texans, but I think we do enough to win this week, with a last minute FG to win 30-28. GO DOLPHINS!!! 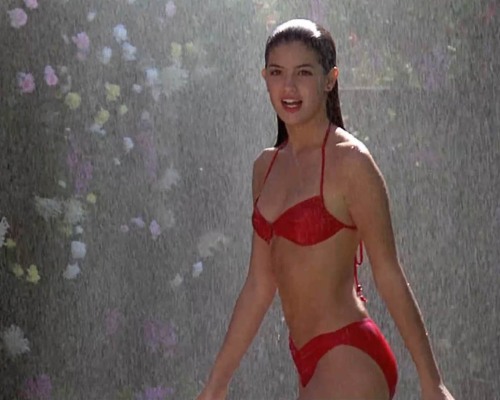