Here we are arriving in week 13 of the NFL season, three quarters of the season behind us and playoffs fast approaching. Except for one thing! Oops, our Dolphins forgot to become a playoff team like they were supposed to.

The much heralded 50th season screwed the pooch. Monday Night football in throwback uniforms ready to bring back the memories of the greatest of the great Dolphin teams and out trots 5-7 the only saving grace is that we aren’t yet mathematically eliminated. Will Eli drive in the dagger? Or will Suh and his Defense deny them and leave us ready to fight another day?

I look around the league at all of the guys who are becoming stars who were the very guys we dissected in recent years leading into the respective drafts. I see, just tonight, four stand out players I remember pounding the table for.

Everson Griffen who had a rough start to his career has become a solid high level Defensive End for Minnesota. 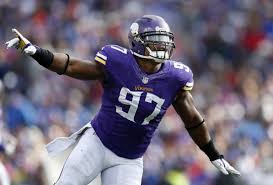 I see Tyron Mathieau who is arguably one of the best Safeties in the game with the Cardinals.

Kyle Rudolph one of many Tight Ends I hoped for us to draft but we passed for someone who I’m sure we cut by now. The Vikes know how to use him.

Harrison Smith another Safety and although injured is also one of the better Safeties in the league.

I see all these guys not just on Minnesota or Arizona but all over the league and I lament the crap decisions Jeff Ireland made. There’s no need to rehash it we all know the score. The point is there really isn’t a need to force a fit with a player there are good players who played at big schools and they come in and help your team, Not Egnew! Everyone said Harrison Smith was a 2nd or 3rd rounder leading up to the draft but Vikings saw otherwise and drafted him in the 1st round and he has been a starter since his arrival and as I said one of the better Safeties in the league. Draft the best players from the biggest schools put them in and let them help you.

Not going to bash Tannehill. I hope he puts that throwback uniform on and it somehow transforms him, maybe it makes the game slow down who know

s. He isn’t at all what I expected this season but with the way things have gone I’d like to see this team put a solid December together so there is something worthwhile to have hope in over the loooong off season where we will once again watch our favorite players get drafted by other teams. Show us the fans some heart and let us see the team that may fall just short of the playoffs and have a hunger heading to next year or hell get lucky and have things fall just right and get into the playoffs as a hot team, Wouldn’t that be something. We’re 1-0 so far this December, incidently it was Cam and his Panthers that had three wins last season heading into December. Well they swept last December and the only loss since was a second round playoff defeat last January.

201 Responses to How’s the Weather