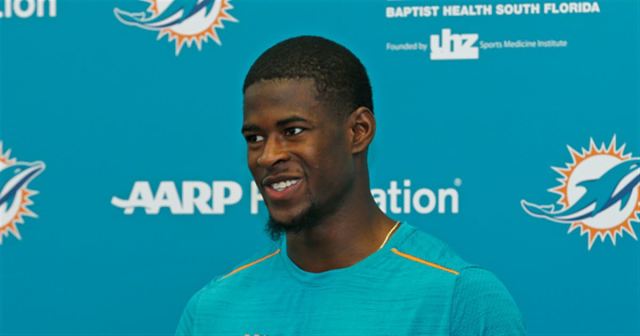 With the 237th pick in the 7th RD, the Dolphins selected their 2nd player on the offensive side of the ball, and a pretty good one too, in WR Isaiah Ford.  The 6’2″ 195 Ford was a very productive receiver at Virginia Tech.  a 3 YR starter, Ford twice went over 1000 yards receiving, and over his 3 YR career at VaTech, he caught 24 TD’s, his best being his Sophomore year, where he had 75 receptions, 1166 yards and 11 TD’s.

Ford brings to the Dolphins the skills to compete for those 50/50 balls, and the size to do it.  He is more of a possession receiver than a deep ball threat, running a 4.61 40 at the combine.  He does run good routes, and has learned how to vary his speed and use short burst quickness to get open.

Isaiah Ford had somewhat of a disappointing mini camp, and finds himself kind of buried on a deep depth chart of WR’s, including Jarvis Landry, Devante Parker, Kenny Stills, Leonte Carroo, Rashawn Scott, and this year’s undrafted free agents Damore’ea Stringfellow, Drew Morgan, Malcolm Lewis and Francis Owusu as well as FA pickup Mitch Matthews.  Obviously, Ford has his work cut out for him, and being drafted won’t put him ahead of any of the guys he’s competing against, only strong performances will.

So that’s it for the 2017 draft class.  We focused on defense, taking 5 of 7 on D,  and improved the depth of our defense significantly, but one more good draft on defense could put us over the top.  On offense, we brought in an OG and a WR later in the draft, and Asiata has a shot at starting this season, despite being a 5th RD pick.  Overall I think we did well, and the team should be better with the help of our ’17 draft class.