The Seven Samurai of the 2020 NFL Draft

Do you hear it?

(The sound of thunder crashes behind Piggy)

Piggy Kiper here.  I’m just going to hide under this desk…Some of you have been looking forward to this post…others will hate it.  No matter where you fall, make sure your squiggly doesn’t get burned by the storm that is coming.  Experts are saying that the 2020 NFL draft is among the deepest draft for wide receiver in years.

A true Samurai never reveals your fate until your throat is already cut!

(the wind picks up behind Piggy)

Most Dolfans don’t view Wide Receiver as a priority, but when you look at our roster, our top receiver is DeVante Parker, a guy who only recently blossomed – can he keep it up? After Parker it’s Preston Williams, who has the look of a great find, but who is still unproven.  Then there is Albert Wilson, the focal point of the 2018 Gase offense, who may be on his way out.  So there is a lot of uncertainty at the position coming into 2020.  I don’t think Dolfans should rule out the possibility of a high pick on a wide receiver.  But even if the Dolphins don’t do that, the Dolphins probably will spend a day 3 pick on a wide put.

But this list isn’t for Day 3 Wideouts – It for Samurai!

So let’s look at these Samurai….but be very careful…they are dangerous…

(A tornado swirls behind Piggy) 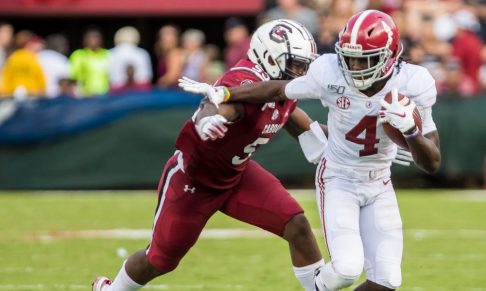 With 159 receptions, 2,742 career yards and 26 career touchdowns in three years at Powerhouse Alabama, no one is overlooking this Samurai.  Jeudy may be the first receiver off the board.  Jeudy may be Odell Beckham, Jr. without the baggage.  He’s physically gifted with incredible speed and agility.  Jeudy made a lot of downfield plays during his time with Alabama and although he is fast, it wasn’t his speed that lead to a lot of those downfield plays, it was his technique.  Jeudy is polished, talented and ready to go.  I expect to see success early for Jeudy in the NFL.  Jeudy is this year’s tornado of talent. 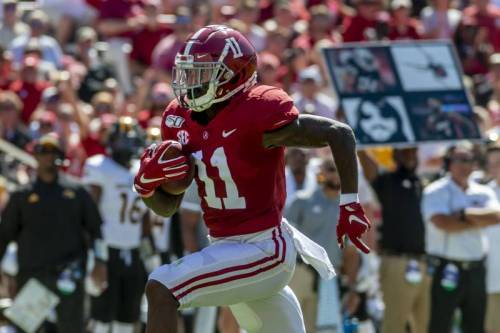 As usual, Alabama was loaded in 2019.  One position that was notable was wide receiver, where play after play, they had receivers making plays down field.  In Ruggs’ case his speed really standouts.  Ruggs ran a blistering 4.27 at the combine.  That is what this Samurai is – FAST.  If you want a guy to run downfield, pick Ruggs.  Ruggs averaged 18.7 yards a catch in 2019.  DBs better have a plan for this kind of speed in the NFL.  One notable negative about this Samurai I don’t want to say to loud (Piggy whispers ducking from a swinging katana) his numbers dropped off a bit after the Tua injury.  But he still runs like lightning and will be a real asset to any offense.

(the Earth quakes below Piggy)

This athletic beast is among the most physical samurai in the draft.  His thick, chiseled frame is generally unaffected by contact from DBs or LBs.  Honestly, it looks like this Samurai looks for contact.  Shenault can be a solid outside receiver, but I think he might be more suited to do what Dolfans have seen guys like Jarvis Landry or Rishard Matthews do for us for years.  Shenault is expected to go anywhere between the late first round to the early third round.  I will whisper the last part…Some people think Shenault may be too physical (a samurai arrow strikes the wall behind Piggy) and he should improve his route running ability.  He is this year’s Earthquake!

(A Volcano erupts behind Piggy)

Jefferson has good speed and he will burn you like lava, but that’s not his greatest strength.  Jefferson is the best route runner among these Samurais.  An top notch technician among this WR class, Jefferson provided a reliable target for first overall pick Joe Burrow.  The LSU offense erupted in 2019 and you can see that in Jefferson’s stats, nearly doubling his yardage from 2018 (875 yards) to 2019 (1,540 yards).  A lot of experts are saying Jefferson will not be a #1 receiver, but will make a heck of a #2.  Jefferson is as reliable as a volcano, if you see one, it will probably erupt some day.

(a tsunami crashes over Piggy) 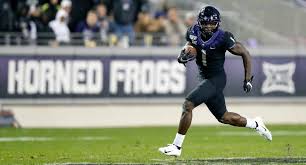 Thanks a lot Jalen, now I’m all wet! (Piggy floats to the surface) It seems calm for a moment…too calm…all of the sudden boom…Jalen Reagor goes the distance and breaks open the game.  With elite speed and an uncanny ability change direction, DBs should never get comfortable around Reagor.  Think of Reagor as a poor man’s Ruggs, if there was no poverty.  Speed both vertically and laterally defines this terrific talent and helped him collect 1,061 yards and 9 TDs in 2018.

(A Blizzard forms around Piggy)

Brrrrrrrrr…This one is cold.  CeeDee Lamb put up great numbers at Oklahoma, not doubt those numbers were inflated by the system – but you can’t ignore what he did.  Lamb looked like he was running around frozen defenders.  He is so quick, they froze in place with his every move.  At 6’2, 189 pounds, he has good size but what stands out about Lamb is his body control.  That body control helps him make some tough catches and then quickly regain his balance and use his quickness to pack on the yards after the catch while the defenders stand around him like icicles.

(A comet crashes in front of Piggy)

Wow! I didn’t even see that coming!  I should have, given Clemson has produced some terrific Samurais over the years.  Higgins is this little Piggy’s favorite samurai this year.  At 6-4, 215 what you can see on the tape with Higgins is his ability to attack the ball while it’s in the air and make it his.  He’s a graceful receiver who will make your toe touching catch on a ball that most receivers think is out of reach.  He will enagage with CBs playing press and come up with the big catch.  He’s also very shifty for a tall receiver and will certianly break tackles and get the all important YAC.  Higgins compares favorably to AJ Green.

Now you know who the samurais are.  Beware! 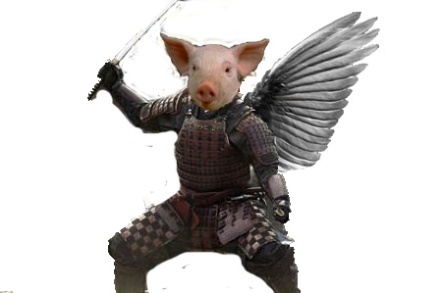