I can’t say I have a clear memory as to when I became a Dolphins’ fan; that is, I don’t remember a specific day or incident I could say marked the moment of the start of my perpetual heartbreak. It is clear I was a fan by the end of the 1976 season, because I remember being disappointed with the 6-8 record…

My family moved from Somers, NY (20 miles southeast of West Point) to Miami in June of 1972- I was six years old. My dad was not a fan of following any team (I think he was a Brooklyn Dodgers fan as a boy, but when they left town, he may have decided it was not worth getting invested), but he was athletic, and was always willing to toss a ball around with me (football, basketball, baseball, tennis…). I got a football uniform for Christmas that year, complete with pads and a helmet- Minnesota Vikings colors without any of the logos. I would put it on and run around like a crazy person, and my dad would “tackle” me. We had a neighbor who was big into watching the Dolphins on TV, and his wife would go crazy watching Mercury Morris running the ball. We could hear her screaming, “Run, you black son of a bitch!” (This was the 70’s, not a very “PC” time in the southern US; I remember mom being a little uncomfortable around this person, but I didn’t understand why, as I had no idea what my neighbor was saying or what it was in reference to- I was young!). 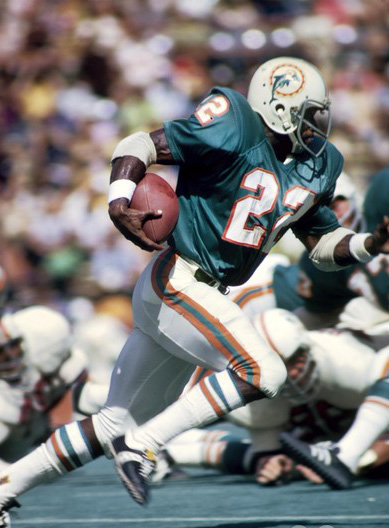 The Dolphins were “the team” of that era, if not nationally then at least locally, and since there was nothing competing for our attention (the next professional team did not arrive in South Florida until the mid 80’s), we were always hearing about Don Shula and Larry Czonka and Bob Griese, and other guys with names like Kuechenberg, Nottingham, Little, Den Herder, Scott, and they were spoken of like they were mythological heroes. People would report sightings of them around town, if you were lucky enough to see any one of them you were the coolest kid for the next few days. When the kids in my neighborhood would get together to play a game, I always wanted to be Paul Warfield or Duriel Harris or Nat Moore, even though I was neither the fastest nor tallest (my saving grace was I had really good hands and would catch just about anything thrown my way). As I got older I became more interested in things outside of the season, like who was on the team and who we drafted or who retired- I vaguely remember the return of Czonka in ’79, how he was welcomed back as the “Prodigal Son Returned”. At this point I could recite starting lineups on both sides of the ball, as well as backups and even most of the coaches.

I have only been to 2 games, but if I remember correctly the Dolphins won each. This was sometime between 1979 and 1982, which means both were at the Orange Bowl. I sat in the endzone for one game, and the north stands for the other. I went with friends of my dad each time, but he didn’t go. I don’t remember anything in particular about either game; I don’t have any memorabilia. I just remember being excited to actually go and see the Dolphins play.

Another poignant moment of my fanhood memory was the strike-shortened season where we made it to the Super Bowl. Mom and dad had separated and mom was broke most of the time, though she worked and went to school without complaining to us about dad or money problems. Somehow she scrounged up enough to order a pizza and get a 2 liter bottle of Coke, and she my youngest sister and I watched as the Dolphins found themselves on the wrong side of an aging John Riggins’ rushing explosion that led to MVP honors for the game. We lost, it sucked- but it was a good memory of time spent with family you find altogether too hard to duplicate as the years go by. Mom is 70 now, a life-long smoker, and has COPD. I don’t know how much longer she’ll be around, but I know she loves the Dolphins because of my sister and I. Just recently she said to me during a conversation about football, “I just hope to live to see the Dolphins win one more Super Bowl”.

The day I realized what being a fan could cost me, and the depths of depression one could descend to, was the playoff game against San Diego, January 2nd, 1982. The ups and downs of that game, the feeling we could do it, Winslow blocking the winning field goal, the overtime, Kellen Winslow dying on the field only to be resurrected (twice!), another blocked kick, the second overtime, Winslow being carried off the field… It’s possible I cried that day, I can’t remember. A guy I was in high school with and who was interning with a photographer for the Miami Herald was at that game, and I helped him develop film, including Winslow being held up by teammates. He told me about being there and the atmosphere of the place, and how hard it was to be there when San Diego won. I’ve had other moments of disappointment with the Dolphins, including the 2 Super Bowl losses in the 80’s, but that game, though we lost, was the single most galvanizing event for me as a fan, because I lived and died with each possession, each success or missed opportunity, and I really believe that not one member of the Dolphins team could have felt worse than I did when Benirschke made that kick. They fought, they bled, they played hard, and they never gave up, even when they were down 24-0 in the first quarter. Who wouldn’t be a fan of a team that represented its city so epically? How could you help it?
Thanks for letting me share my story of Dolphins fandom with you. I look forward to reading others’ recollections. We can always hope the return to glory is just around the corner. 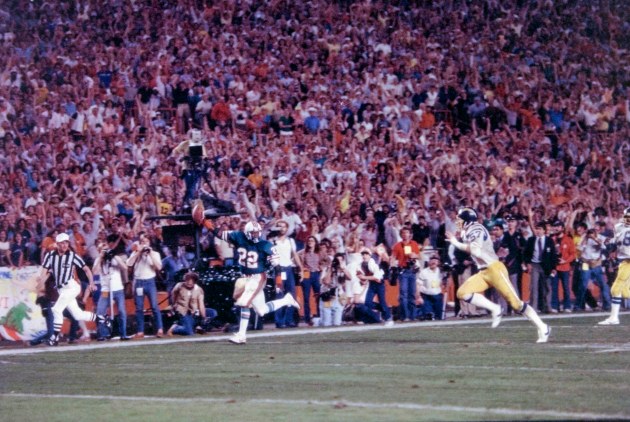 Like Loading...
This entry was posted in Fan Origin and tagged Try Pod - Fan Origin. Bookmark the permalink.