The Miami Dolphins convincing 30-14 victory the previous Sunday at New England put to rest any concerns about Miami’s offensive production. Since losing at Oakland in week #2, the Dolphins had ripped off five consecutive wins, averaging 30 points per game in the process.

Miami’s offensive line, the best in the entire National Football League, had led the way.  The passing game was clicking.  The running game was both dominant and time consuming.  And, through seven games, quarterback Bob Griese had been sacked only SEVEN TIMES!  Even the most fanatical Jets fans realized that on this cold and windy day New York would be a decided underdog.

Head coach Don Shula knew that a win over New York would put his team closer to achieving his first major goal of the season: winning the AFC East and a spot in the playoffs.  A victory would put the Fins at 7-1, fully two games clear of the Buffalo Bills, who were losing at New Orleans.  If form held true, the Patriots, Colts and Jets would all be 2-6 and effectively out of the playoff race in a 14 game regular season.

More thoughts came to Shula’s mind as he pondered this game.  The Jets and Joe Namath were responsible for Shula’s darkest moment, his 16-7 loss in the historic Orange Bowl as head coach of the favored Colts in Super Bowl III.  When Shula became head coach of the Dolphins in 1970 the Dolphins had NEVER DEFEATED the Jets, losing all eight previous meetings.  Shula promised Dolphin fans he would turn around the Jets-Dolphins rivalry.

Shula delivered.  Beginning in 1970, Shula’s Dolphins won 14 of the next 16 games in this blood rivalry!!  Long suffering Miami fans were absolutely THRILLED TO TEARS as their beloved Fins POUNDED the Jets and their nasty, profane, fans for nearly a decade!!  But no one wanted to beat the Jets more than Don Shula.  With him, it was personal.  It was THE PAYBACK for Super Bowl III.

In 1972 Shula’s Dolphins won two close, hotly contested games vs. the Jets on the way to the NFL’s one and only Perfect Season.  The second game (which Miami won 28-24 after trailing 17-7) was played in front of 80,000 crazed, frenzied fans in the historic Orange Bowl.  It was a particularly brutal game.  A total of nine New York players had to be helped off the field.  Six of them were put out for the season in what Jets’ defensive back Steve Tannen called “a war.”  The effects of this game would last for YEARS!  The Jets would never have another winning season in the decade of the ’70’s!!

Things seldom seemed to go as expected in the Dolphins-Jets rivalry.  Yes, Miami seemed to be clicking on all cylinders, winning five straight contests.  Yes, Joe Namath was out with an injury.  And, yes, back up QB Al Woodard had been inconsistent.  But this was the Dolphins and the Jets, where ANYTHING could, and usually DID, happen!  Jets star running back, and future Hall of Famer, John Riggins, hoped he could lead his team to s stunning upset victory.

Jets’ fans roared as the Dolphins started their first series from the Miami 20.  Hard running by Csonka and Morris got Miami rolling.  On third down, Griese completed a 12 yard pass to Jim Kiick.  Another third and long saw Griese hit Kiick out of the backfield again for a clutch first down.  From the New York 19, Mercury Morris burst through a nice hole and scored!  7-0, Miami, at the end of the first quarter.

New York’s offense came alive in the second quarter.  Crisp passing by Al Woodall to running back Emerson Boozer and speedy tight end Richard Caster got the Jets moving.  From the Miami 1 yard line, John Riggins roared into the end zone to tie the score at 7-7.  A few minutes later, Riggins scored again, this time from the 3, and the underdog Jets had a 14-7 lead!  Jet fans were screaming their lungs out!! 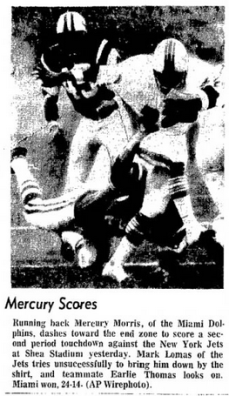 Miami’s defensive lineman Manny Fernandez stopped yet another Jets drive when he pounced on a fumble at the Dolphins’ 43.  Key receptions by Jim Kiick and Marlin Briscoe got the Dolphins deep into Jets’ territory as time ticked away.  Pulling guard Larry Little led Mercury Morris on a 4 yard touchdown jaunt and the Dolphins had tied the game at 14-14 just before halftime.  In the locker room, Griese and Paul Warfield discussed possible ways to beat Jets cornerback Earlie Thomas.  On Miami’s first drive of

the third quarter the offense advanced the ball to the Miami 44 on running plays.  Then Griese threw a perfect 19 yard strike to Briscoe to New York’s 37 yard line.  Griese decided it was time to hit Warfield with a long bomb.  But just after Griese released the ball, a gust of wind caught the ball, causing it to flutter.  Warfield casually ignored the ball then sharply reversed his field, causing Earlie Thomas TO FALL DOWN!!  Warfield snared the pass and exploded past Chris Farasopoulos for the go-ahead touchdown!  “Warfield really suckered our cornerback,” said Jets head coach Weeb Ewbank.  Clearly, it was one of the most amazing moves ever performed by the future Hall of Fame wide receiver!

A long Miami drive later in the third quarter ended when Garo Yepremian connected on a 20 yard field goal, putting the Dolphins ahead 24-14.  Miami’s ground game, supplemented by key Griese completions, helped Miami control the ball in a scoreless fourth stanza.  When the game ended, Miami celebrated their hard fought 10 point victory against a tough and determined Jets squad.

In the post game locker room, Don Shula singled out Bob Griese for his play calling and extra sharp passing (13-19, 198 yards and the key touchdown to Warfield).  Csonka, Kiick and Morris also drew praise, as did the “No Name Defense” for shutting out the Jets in the decisive second half.

The 1973 Miami Dolphins were now 7-1.  And they had SWEPT the two-game series with the hated Jets for the second consecutive season!  Somewhere, Don Shula was smiling.