Posted on September 8, 2015 by finsmob unleashed

The team we know as the Detroit Lions was founded in 1929 in Portsmouth, Ohio. The Portsmouth Spartans attracted players from semi-pro teams in the West Virginia-Ohio-Kentucky tri-state area. The residents of Portsmouth loved their new team. They agreed to build their team a new home known as Universal Stadium, a venue comparable to football stadiums in nearby communities along the Ohio River. This prompted the fledgling National Football League to offer full league membership in 1930. Portsmouth became the NFL’s second smallest city, barely exceeding the population of Green Bay, Wisconsin, at that time.

Portsmouth’s inaugural NFL season saw them compile a 5-6-3 record in league contests. Two years later (1932), Spartans’ coach Potsy Clark refused to make even a single substitution against the defending NFL champion Packers. Portsmouth would go on to win the “iron man game” 19-0 with the same 11 men playing EVERY PLAY IN THE GAME!! 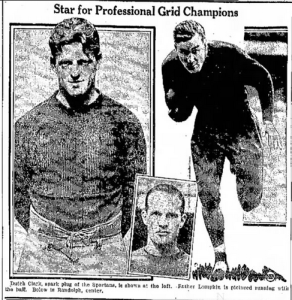 At the end of the 1932 season the Spartans were tied for first place with the Chicago Bears. That prompted the very first NFL title game to decide the league championship. (In prior years the team with the best regular season record was awarded the NFL title.) The Bears’ home field, Wrigley Field, was unplayable due to a severe blizzard. The title game thus was moved INDOORS to Chicago Stadium, home of hockey’s Chicago Black Hawks. The smaller indoor playing surface necessitated an 80 yard playing field.

Bears fans packed the indoor stadium. To their absolute delight, Chicago’s “Monsters of the Midway” defeated Portsmouth 9-0, keyed by a touchdown pass from Bronko Nagurski to “The Galloping Ghost,” Red Grange. The resulting interest in the title game led to the creation of Western and Eastern conferences, with the respective winners subsequently meeting in an NFL Championship Game yearly since 1933.

Portsmouth would continue to have success on the football field. Off the field, poor revenues and the Great Depression threatened the Spartans’ survival. In 1934 Detroit radio executive George Richards purchased the struggling franchise for just under $8,000. Richards moved the team to the Detroit area where they became known as the Lions. A year later (1935, the Detroit Lions won their first NFL championship, beating the New York Giants 26-7.

Detroit enjoyed their greatest triumphs in the decade of the 1950s. Led by legendary quarterback Bobby Layne, Detroit defeated Paul Brown’s Cleveland Browns 17-7 in the 1952 title game. A year later the Lions repeated as champions when Layne found receiver Jim Doran with a 33 yard touchdown pass in the game’s final minute for a 17-16 victory! In 1954 Layne again got the lions to the championship game where they were defeated by the Browns.

Detroit fielded another championship team in 1957 under the direction of rookie head coach George Wilson, Sr., who, in 1966, was named the first head coach of the AFL expansion Miami Dolphins. Bobby Layne was injured during the course of the ’57 season. His back-up, Tobin Rote, passed for FOUR touchdowns and ran for another as Detroit CRUSHED Cleveland 59-14 in the championship game, bringing the Lions their third NFL crown in six years!

Not long after that game, Detroit shocked Layne by trading him to the Siberia of the NFL, the Pittsburgh Steelers. An incensed Layne placed a curse on the Lions’ franchise, saying they’d NEVER WIN another NFL title because of their mistreatment of him. 57 YEARS LATER, the Lions have failed to even get to another title game, winning only ONE playoff game during that period of time!

The slow starting Lions got hot midway through the 1973 season. Detroit had won five of their last seven games coming into the final game of the regular season. Meanwhile, Shula’s Dolphins were coming off their WORST PERFORMANCE OVER THE LAST TWO YEARS, an embarrassing 16-3 drubbing by the lowly Colts. When asked about this, Baltimore head coach Howard Schnellenberger said, “I feel sorry for whoever plays the Dolphins next week.”

Miami head coach Don Shula wanted the offense, the defense and the special teams to come up big in the Detroit game. “We’ve GOT to regain our momentum for the playoffs” said the Don of Miami. Somebody would HAVE to step up. But who???

A bright, sunny, 69 degree day greeted the players for this 1:00 PM kickoff on Saturday, December 15, in the historic Orange Bowl. The fans were noisy. The players were jumping with enthusiasm. Soon, very soon, we’d have the answer to the question “Who is going to step up for Miami?”

On the game’s third play, Lions running back Mel Farr was CRUSHED by defensive end

Vern Den Herder, who recover Farr’s fumble at the Detroit 21. Next play, wide out Paul Warfield made eye contact with QB Bob Griese. Rookie cornerback Levi Johnson had NO CHANCE! Warfield blew by Johnson and caught Griese’s perfect pass for a 21 yard touchdown! One possession, one play, one touchdown! It was just that easy!

On Miami’s second possession, Griese and his offense started a drive from their own 18. Tough running by Larry Csonka and Jim Kiick got the Dolphins into Detroit territory. Later, from the Lions’ seven, Griese called on Warfield again. TOUCHDOWN MIAMI!! The Fins led 14-0 after one quarter.

The Dolphins’ defense continued to stifle QB Greg Landry and the Lions’ offense. Detroit would run the ball 38 times for just 3.8 yards per carry. Landry, and back up QB Bill Cappleman (a Florida State product) would combine for 10 completions in 21 attempts for 73 net yards, two interceptions and no touchdowns. A trick pass play by reserve player Mickey Zolfo netted Detroit 35 yards later in the game. 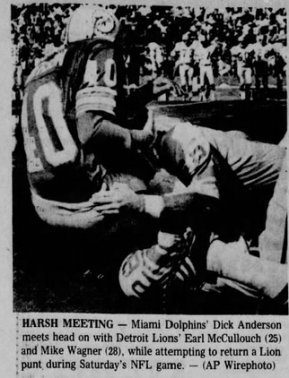 Miami continued their merciless destruction of Detroit. A Yepremian field goal on Miami’s third possession expanded the lead to 17-0. On their fourth possession, Miami drove the ball all the way down to the Lions’ 16 yard line. This time veteran DB Miller Farr was covering Paul Warfield. It didn’t matter. Warfield easily faked-out Farr, turned on his olympic speed, and scored his THIRD TOUCHDOWN OF THE FIRST HALF! 24-0, MIAMI!!

Once, again, the “No-Name Defense” stopped Detroit cold. A Larry Ball interception gave Miami another chance. Griese used the clock carefully as he drove his team down the field on their fifth possession of the first half. Miami was at the Detroit four with less than a minute left to go in the second quarter. On the very next play, Warfield unbelievably BEAT A DOUBLE TEAM AND SCORED HIS FOURTH RECEIVING TOUCHDOWN OF THE FIRST HALF!! It WAS, and still IS, AN ALL-TIME MIAMI RECORD!! The man who had “stepped-up” was the INCOMPARABLE PAUL WARFIELD!! The Dolphins had an insurmountable 31-0 lead at halftime!! –Five possessions; five scores!!

A merciful Don Shula pulled both Griese and Warfield at the half. Other star players took a seat as the Dolphins concluded the regular season with a 34-7 win over an outclassed Lions team. In the Lions’ locker room, head coach Don McCafferty confessed “I was trying to get the officials to call the game at the half. But they said they couldn’t do that!”

In the winners’ locker, Bob Griese and Don Shula emphasized that Miami’s first objective (making the playoffs) had been achieved. “Now it’s a new season,” said the Don of Miami. But while Shula talked to the media, the other players were alternately shaking their heads and giving hugs to the man who had truly amazed EVERY PLAYER and EVERY FAN lucky enough to have witnessed this historic performance. Paul Warfield had given the greatest performance of all time by any Miami receiver. And he had removed whatever doubts may have existed after the Baltimore game. Make NO mistake about it; the Miami Dolphins were THE TEAM TO BEAT in the 1973 playoffs!!