Posted on September 22, 2015 by finsmob unleashed

By: by Randy Campbell (OLD DOLFAN) 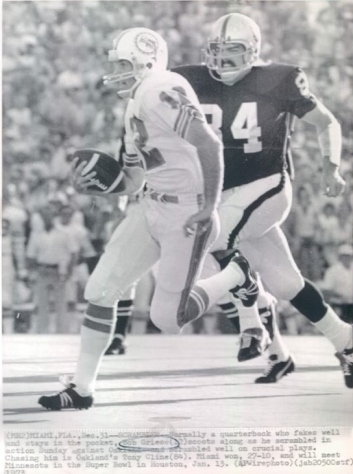 The Oakland Raiders came into existence because Los Angeles Chargers’ owner Barron Hilton threatened to forfeit his franchise unless the fledgling American Football League placed a second team on the West Coast. Hilton, one of the wealthiest men in America, got his way. Subsequently, an Oakland limited partnership was created to run the proposed Oakland AFL franchise. Oakland would be the eighth, and final, charter member of the AFL thanks to Hilton’s demands.

The Raiders went 6-8 in the first year of the American Football League (1960). They split their home games between San Francisco’s Kezar Stadium (home of the NFL’s ’49ers) and brand new Candlestick Park (home of baseball’s Giants), also in San Francisco. The team lost about $500,000 that year and may have folded but for a $400,000 loan from Ralph Wilson, owner of the Buffalo Bills.  Bleak times continued as Oakland went 2-12 in 1961, drawing less than 50,000 fans for the ENTIRE SEASON!! In 1962, the team was moved to Frank Youell Field in Oakland (capacity 18,000). The team lost their first 13 games of the season and head coach Marty Feldman was fired. After the ’62 season, Oakland managing partner H. Wayne Valley hired former Chargers’ assistant Al Davis as head coach and general manager. It would be the turning point in the history of the franchise. The Raiders moved into brand new Oakland/Alameda County Coliseum in 1963 with 33 year old Davis firmly in control. Oakland went 10-4 that season and established themselves as a leading franchise in the AFL.

In 1966 Davis bought 10 per cent of the franchise for $18,000 and named himself as partner in charge of football operations. He hand selected John Rauch to be the next head coach for 1967. That year the Raiders crushed the Houston Oilers 40-7 in the AFL Championship Game, earning them a trip to Super Bowl II in the historic Orange Bowl. Oakland fell to the Packers 33-14 in what would be Vince Lombardi’s last game as head coach of Green Bay.

The following two years saw Oakland win the AFL Western Division crown, only to be defeated in the AFL Championship Games by the eventual Super Bowl winning teams, the Jets (1968) and the Chiefs (1969). By this time, future Hall of Famer John Madden had become Oakland’s head coach.

The AFL and the NFL merged in 1970. That year Oakland lost their third consecutive AFL/AFC title game to the team that eventually won the Super Bowl, the Baltimore Colts. Madden’s Raiders went 8-4-2 in ’71 but failed to make the playoffs.

Oakland’s 1972 team seemed headed for a playoff showdown with the undefeated Miami Dolphins. But, in one of the most controversial endings to ANY game, Oakland LOST 13-7 when Pittsburgh’s Franco Harris caught a deflected pass on fourth down and scored in a game forever known as the “Immaculate Reception.” It was the Steelers’ first playoff game in their 40 year history!!

The 1973 Oakland team that roared into the historic Orange Bowl on December 30 was loaded with future Hall of Famers and star players. Besides Al Davis and John Madden, the Raiders boasted future HOFers Fred Biletnikoff, Gene Upshaw, Art Shell, Jim Otto, George Blanda and Willie Brown. Star players like Ken Stabler, Darryle Lamonica, Jack (the Assassin”) Tatum, Otis Sistrunk and George Atkinson made the Raiders one of the most talented (and nasty) teams ever assembled! And they had just crushed their nemesis, the Pittsburgh Steelers, the week before in Oakland.

The Raiders-Dolphins rivalry had been a lopsided affair as of 1973. Miami’s first coach, George Wilson, NEVER defeated Oakland from 1966 through 1969, going 0-5-1 against them. His successor, Don Shula, broke through with a victory during the 1970 regular season. But Oakland got revenge, edging Miami in the 1970 playoffs.

The next meeting between these franchises occurred the second week of this 1973 season. That game saw Oakland break Miami’s 18 game winning streak when they edged the Dolphins 12-7 in a game played in Berkeley. Shula believed the absence of Paul Warfield may have been the difference between victory and defeat. This time, though, Warfield was healthy and raring to go. His devastating crack-back blocks would play a key role in Miami’s running game as these two teams squared off for a trip to Super Bowl VIII!

Miami’s players and coaches so badly wanted to avenge their earlier 12-7 loss to Oakland. Many secretly hoped they’d get the chance to do JUST THAT in the playoffs!! The football gods had granted their wish. And, just to throw more gasoline onto the playoff fire, Raider QB Ken (the Snake) Stabler said,”There’s no doubt WE are the best team in the American Football Conference!”

80,000 frenzied, fanatic, fans jammed into the 75,000 seat Orange Bowl on game day. I was one of them! Me and “My Boyz” had had a belly full of the “Bad Boy” Raiders and their idiotic fans who, thankfully, were only able to buy a small number of tickets to this contest. The old stadium nearly exploded as the white clad Dolphins ran onto the field!! Some of us were already hoarse even though the game hadn’t even started!!

It was a perfect 74 degree day at kickoff. Where else to play this game other than the historic Orange Bowl?? It was, in so many ways, PERFECT!! I turned to my brother-in-law Jim and said “The Raiders have NEVER seen anything like this! –We’ll remember this game for the rest of our lives!”

The Dolphins won the toss and elected to receive. In their prior playoff win over Cincinnati, Miami won the toss and SCORED on their very first drive. Quarterback Bob Griese was hoping his offense could do the same thing against Oakland.  Griese took turns handing off to Csonka, then Morris, then Kiick. Guard Bob Kuechenberg, playing with a thick cast on his broken arm, was having a field day wielding his “weapon” and abusing Raider defensive linemen! “Oakland’s defense talks a lot,” said Kooch. “The best way to shut them up is to beat them down, physically.” Kuechenberg did just that, bludgeoning several Raiders, one of whom (Sistrunk?) sported a bloody face in the first quarter.

Miami’s initial drive bogged down at the Oakland 38. It was third down and 11 yards to go. Griese dropped back, saw nobody open, and ran up the middle of the field for 27 yards and a first down at the 11! A massive roar came from the Dolphin faithful. From the 11, Larry Csonka burst through a nice hole and SCORED THE FIRST TOUCHDOWN OF THE GAME! The Orange Bowl erupted as Miami took a 7-0 lead.  Griese’s key run on the first drive was a product of long hours watching game film. Griese noticed that, on third and long situations, Oakland often brought in a fifth defensive back and removed a linebacker. This nickel back would cover the tight end while the other DB’s double covered the wide receivers. Griese saw that when the tight end went deep and the receivers veered to the sidelines, there was no one left to cover the middle of the field. This knowledge would pay more dividends to Griese later in the game.

Moving exclusively on the ground, Griese again made use of all three of his primary running backs. This 15 play, eight minute drive. ended when Larry Csonka scored on a two yard dive making the score 14-0, Miami, at halftime! A bruised and battered Oakland defense was getting little help from the Oakland offense. Miami’s “No-Name Defense” had stuffed Oakland in the first two quarters.

A fired-up Oakland offense moved the ball deep into Miami territory early in the second half. George Blanda’s 21 yard field goal gave the Raiders some life and some hope. But Miami responded with a drive of their own. Garo Yepremian’s 42 yard field goal attempt was PERFECT! Miami was cruising with a 17-3 lead.

But the cruise soon hit a major bump. Quaterback Ken Stabler began to hit receivers Fred Biletnikoff and Mike Siani. A pass to running back Clarence Davis got Oakland their offense in high gear. From the Miami 25, a mix-up in the Miami secondary left Siani open for a 25 yard TD reception! Blanda’s conversion narrowed the gap to 17-10 entering the fourth quarter.

Shula told Griese “We’ve GOT to regain the momentum. Go out there and SCORE!” With the game on the line, Miami began their next drive from their 18 yard line. More runs and a rare passing play got the ball near midfield. Then, on third and seven from the Raiders’ 45, Griese went backinto the huddle and CALLED HIS OWN NUMBER!

Just as before, Oakland left the center of the field uncovered. And, just as before, Bob Griese ran the quarterback draw to perfection! His 17 yard gain to the Oakland 28 was HUGE! A few plays later, Yepremian drilled a 27 yard field goal, giving the Dolphins a safer 20-10 lead midway through the final quarter.

A desperate Ken Stabler moved the Raiders up to their own 45. It was fourth down and one yard to go! Head coach John Madden knew time was running out. His team had to go for it! Everyone in the historic Orange Bowl was standing. The noise was deafening!! Then, fullback Marv Hubbard was CRUSHED by a head-on collision with Miami safety Dick Anderson! The ball squirted loose behind the line of scrimmage! Stabler fell on it but was unable to get up and advance the ball. Miami took over on downs. Out came the white hankies as Dolfans celebrated this huge play by their All-Pro safety!

A few minutes later, Larry Csonka scored his THIRD TOUCHDOWN from the Oakland two yard line! The Miami Dolphins had defeated the Oakland Raiders 27-10 in a bruising display of brute power running! But the biggest runs were NOT by a bruising runner. “Griese’s two runs broke our backs,” said Oakland linebacker Phil Villapiano. 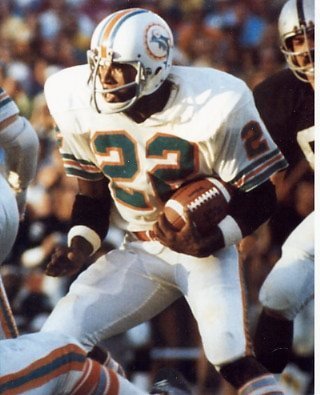 On the day, Miami ran the ball 53 times for 266 yards (a 5.0 average) and those three touchdowns by Larry Csonka. Csonka ran for 117 yards; Morris got 86 yards on just 14 carries; Kiick got 12 yards. But Griese’s 44 yards on two key carries may have been the most important carries of the game! (Griese had a third carry in the game which lost 5 yards. Still, his 39 yards net rushing exceeded his 34 yards net passing — 27 of which were to Warfield!)

Miami’s victory meant that they would be the FIRST TEAM IN HISTORY TO MAKE IT TO THREE STRAIGHT SUPER BOWLS! And a win vs. the Minnesota Vikings in Super Bowl VIII would put Shula’s Dolphins next to Lombardi’s Packers as the only teams to win CONSECUTIVE SUPER BOWLS up to that point!

Me and “MY BOYZ” had plenty to celebrate! Our team had sent the “Bad Ass Raiders” back to Oakland with their tails between their legs! It was PARTY TIME! The Miami Dolphins were going to the SUPER BOWL!!