I was sitting out on my porch and heard some noise over by the compost pile so I decided to go take a look and what do I find – A pig and not just any old pig it was our Piggy the Flying Pig. He said he would have knocked but the compost smelled too good and he couldn’t resist. Piggy stopped by to talk football and what not.

Son: Piggy is that you, what the hell are you doing here in my compost pile?

Piggs: Sorry it smelled too good out here.

Son: Do you have to roll it all – all over the yard

Son: Piggs, that sure was a tough loss on Sunday wasn’t it?

Flying Pig: It sure was, my trotters are sore from pounding on the table.

Son: I know it, I broke three beer bottles firing them at the wall.

FP: Son tell me are we doomed? Will the Dolphins always suck? …and by the way are you going to eat that banana peel?

Son: No Piggs I’m not going to eat the banana peel that’s why I threw it in the compost pile, go ahead enjoy it. You can have that cantaloupe rind too if you want.

FP: (wiping all manner of stuff from his chin) Thanks son.

Son: No problem Piggs any trash of mine is always a meal for you my friend. And the answer to your question is – No. Well at least that’s what I thought a couple of weeks ago.

FP: (face full of mess and grunting) What? 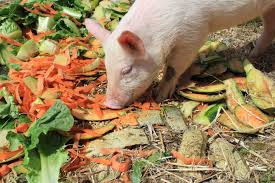 Son: Say piggs there’s a few apple cores and some watermelon rind over there why don’t you finish those up and then come over to the porch so we can talk.

Piggs finally gets his fill of son’s compost and heads over to son who’s waiting on the porch with some beers.

Son: Hey, there you are Piggy, did you get enough?

Son: (muttering under his breath) You ate like a pig I hope so.

FP: What was that son?

Son: I said you ate that fig over there also.

FP: I wanted to take you for a flight to give you an exclusive look at the newly renovated stadium before the regular crowd gets to see it this weekend.

Son: Wow really you want to take me on a Piggy flight? Ok sure.

Flying Pig: Get on son and let me show you around

FP: That’s my squiggly so can you please let go, now turn around so we can go

Son: Oh sure, sorry my bad. Never been on a pig before.

So there we are the Flying Pig and Son heading to tour the newly renovated Sun Life stadium and to talk football.

FP: That the Raiders, Browns, Redskins and Jags all won?

FP: That DeMarco Murry only had 2 yards on 13 carries?

Son: Nope, let me tell you

FP: That the Colts look worse than your compost pile?

Son: No, that Jared Odrick actually made a play.

FP: That is amazing, he never did that in 5 years in Miami.

Son: I know it figures he’d do it against the Dolphins and not for them.

FP: All we needed was one of those Tony Romo type 30 second up the field drives to kick a field goal and tie the game.

Son: I know, did you see on the last play 4th and whatever it was that NOBODY covered Landry?

FP: Don’t even get me started…

Son: Tannehill didn’t even look at him, he threw it into coverage and incomplete on the other side of the field

Son: What the hell

FP: Its OK Son I like to fly in close to those flocks of birds and then watch this (Piggy unloads a massive fart on the birds)

Son: Whoa look at them scatter. Ewwwwww that smells (Son holds his nose)

FP: My job is done here.

FP: Well we’re making our approach we should be over Sun Life in just a couple of minutes.

Son: Cool, and at least the air has cleared a little

This sucks, I’m still too pissed off to enjoy it here. Maybe we’ll win Sunday and that will change. Hey piggs do you think you can crop dust the stadium as we head out?

FP: (Piggs thinks to himself, der of course you idiot I do that every time) Sure Son.

Piggs and Son head back to Oviedo

FP: So did you enjoy the flight?

Son: (Clothes smell like pig shit) Ummm yeah I did it was fun, kind of smelly though

Just as Piggy gets over Son’s back yard he applies his air brakes and Son is sent sailing over piggy and he lands right in the middle of the compost pile.

232 Responses to A Piggy Flight