Yes, I know, I used those exact same words to begin my first article on The Perfect Season. But those words are extremely important to those of us who witnessed Absolute Perfection. It is something young Dolfans should always remember. It is something old Dolfans will never forget.

The Houston Oilers dominated the early years of the American Football League. They had high profile super stars, such as legendary quarterback and placekicker George Blanda and Heisman Trophy winner Billy Cannon. But they also had ace wideout Bill Groman from division III Heidelberg College. Groman led the AFL in receiving in 1960 with nearly 1500 yards and a 21 yards per catch average. Fullback Dave Smith, from tiny Ripon College, keyed the running game along with Cannon.

The Oilers won the very first AFL Championship Game 24-16 over the Los Angeles Chargers (led by future vice presidential candidate Jack Kemp). A year later, in 1961, Houston defeated the now relocated San Diego Chargers 10-3. Houston’s attempt at a “3-Peat” failed when they lost the 1962 AFL title game to Lamar Hunt’s Dallas Texans 20-17 in a double overtime thriller. Humt subsequently moved the Texans to Kansas City where they became the Chiefs in 1963.

The Houston Oilers team that took on the Dolphins the second week of The Perfect Season was a far cry from the juggernaut Oilers of the early 1960’s. Both George Blanda and Billy Cannon were shipped to the Oakland Raiders. They were replaced by a group of ragtag misfits who would produce a 1-13 record in 1972. The only star on this Oiler’s team was future Hall of Fame receiver Charlie Joiner.

Miami head coach Don Shula was taking nothing for granted. He was intimately familiar with the “On Any Given Sunday” credo. His totally unexpected loss as head coach of the Colts to the upstart Jets in Super Bowl III still ate at his belly. And his lopsided loss in Super Bowl VI to the Cowboys was still fresh in his mind. Shula decided he would take out some of his frustrations on this outmanned Oilers squad.

Shula was pleased with Miami’s ground game in 1971. Csonka and Kiick were outstanding. But Shula wanted more, much more. So he made heavy use of speedy Mercury Morris during the 1972 preseason. Morris responded with several spectacular long runs.

The Don of Miami thought the Houston game would be the perfect time to spring Morris on the National Football League. Shula’s timing was just right. The “Three Back Offense” made its first appearance in game #2 of The Perfect Season.  Morris ran 15 times for 94 yards and a touchdown. Csonka had 17 carries for 79 yards and a score while Jim Kiick ran 9 times for 55 yards and a TD. The result was a team record 17 first downs rushing for 247 yards on the ground. 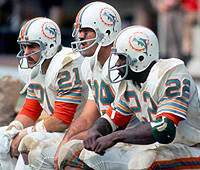 In the second quarter Bob Griese tossed a perfect deep pass to Paul Warfield good for 39 yards to the Oilers 10. A six yard burst by Kiick was followed by a four yard touchdown run by Csonka and Miami led 20-0 at the half. Combined with Miami’s 17-0 halftime lead at Kansas City in game 1, the Fins had now out scored their opponents 37-0 in the first halves of their first two games.

Miami seemed to take complete control of the game when they roared down the field during the first few minutes of the third quarter. Griese capped the 76 yard drive with a two yard TD scamper and the Dolphins led 27-0.

Game over?  Not quite.

An 82-yard TD bomb, Pastorini to Joiner, was followed quickly by a one yard touchdown plunge by Willie Rodgers annd, suddenly, it was 27-13. Shula said he felt a “little uneasy.” 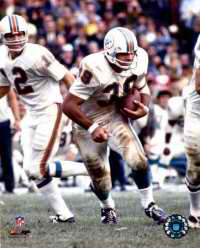 Not to worry. The “Three Back Attack” had the remedy for Shula’s unsettled stomach. A 16 play 93 yard drive consuming over seven minutes of the clock was just what the doctor ordered. Csonka carried the ball four times. Morris had three carries. Griese completed key passes to Paul Warfield and Marv Fleming.

The drive ended when Griese tossed a perfect 6 yard TD pass to Jim Kiick in the left corner of the end zone. Yepremian’s conversion on the rain slicked polyturf surface gave Miami a safe 34-13 lead.

Some wondered “Would all 3 members of the Three Back Attack gain 100 yards?” Not on this slippery day.  Shula wisely replaced his starters with back-up runners Hubert Ginn and Charlie Leigh.

In the Houston locker room, head coach Bill Peterson (whose coaching success at Florida State led to the Oilers job) was in awe of the Dolphins’ effort. “Let me say the Dolphins aren’t a good football team, — they are a GREAT football team. They showed it in the fourth quarter on that game clinching drive.”

For just a few minutes Shula allowed his team to enjoy their victory over an outmatched Oilers team. Then, he turned his attention to next week’s challenge. He knew his Dolphins would be underdogs on the road at Bud Grant’s Minnesota Vikings. Yes, there was trouble on the horizon.