The Miami Dolphins 3-0 start captured the attention of football fans everywhere. Upset road wins over Kansas City and Minnesota resulted in rampant speculation concerning Miami’s status as a legitimate Super Bowl contender. Could a team in just their seventh year of existence, from the “inferior” American Football League, actually WIN the most prestigious trophy in American Sports?

No discussion of THE PERFECT SEASON is complete without a thorough understanding of the most important football game ever played — Super Bowl III in the historic Orange Bowl.  From 1960 through 1965 the NFL

and the AFL were locked in a death struggle. Each league held its own separate draft of college football players. The top players could (and DID) play one league’s offer against the other league’s offer, escalating rookie player salaries to amazing levels.  In 1965, the New York Jets, owned by Sonny Werblin, offered Alabama’s All-American quarterback Joe Namath the unprecedented sum of $450,000 to sign a contract (the NFL’s Cardinals had offered less than $200,000 — an amount Namath was ready to sign for).  This one incident, more than any other factor, brought about a merger of the two leagues. It also led to a common draft and somewhat controlled salaries for pro football players.  The two leagues agreed that an AFL-NFL World Championship game would be played, beginning in January of 1967. By 1969, the name of this game had been changed to “The Super Bowl.”

Traditional old-guard football experts agreed that the NFL likely would destroy the champs of the younger AFL.  In the first two Super Bowls, Lombardi’s Packers blew-out the Kansas City Chiefs (35-10) and Al Davis’ Oakland Raiders (33-14), the latter game having been played in the Orange Bowl.  A year later, the Super Bowl returned to the Orange Bowl for what most believed would be another lopsided win by the NFL.  This time, young head coach Don Shula and his Baltimore Colts would represent the NFL. Shula had overcome the loss to injury of stellar quarterback John Unitas by replacing him with the man who was voted the NFL’s Most Valuable Player — Earl Morrall.

At the same time, young Joe Namath had finally lived up to his superstar image (and salary) by leading the upstart Jets to the Super Bowl in his fourth professional season.  No one outside of New York thought the Jets had a prayer in Super Bowl III.  Namath and his team mates watched as

the spread rose to 15, then 16, then 17 points in Las Vegas.  Jimmy the Greek Snyder said “It will be a 21-point spread by game time. The Jets have NO CHANCE!”  At a banquet in Miami a few days before the game, a reporter asked Namath, “What do you think about being almost a 3-touchdown underdog?”  Namath responded with perhaps the MOST FAMOUS QUOTE IN PRO FOOTBALL HISTORY; “We’re going to win this game, I GUARANTEE IT,” said the cocky Namath!  A hush fell over the banquet.  Colts players 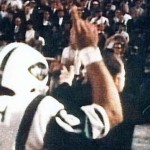 who were at this banquet literally stood up and glared at Namath.  It was “Game On!”  The media frenzy that followed exceeded anything ever seen before in South Florida.  In fact, Super Bowl III became the most anticipated sporting event in Sunshine State history up to that time!  As we all know, Joe Namath delivered on his guarantee.  He talked the talk!  He walked the walk!  The 3-touchdown underdog Jets prevailed over the NFL’s Colts 16-7.  When the Kansas City Chiefs repeated the Jets’ success by crushing the favored Vikings in Super Bowl IV, the verdict was in.  The AFL had two Super Bowl wins; the NFL had two Super Bowl wins.  The following season, the two leagues totally merged, ending the separate league format.  By now, it was understood that the best teams in the AFL could “play with, and BEAT, the best teams in the NFL.”  This gave added importance to the Dolphins-Jets showdown in New York.

Joe Namath was still the ultimate sports icon the day the undefeated Dolphins arrived at Shea Stadium to play the Jets.  In week#1 of the season Namath led New York to a 41-24 win over Buffalo.  In week #2, Namath passed for 496 yards and SIX TOUCHDOWNS as the Jets outscored the highly regarded Colts 44-34.  Many in New York believed THIS would be the year Namath would get the Jets back to the Super Bowl!  (P.S.-Jets fans are STILL waiting 43 years later!)

Miami knew they would have to control the Jets’ high octane offense.  Shula developed a two pronged approach.  First, he planned to make more use of a back-up wide receiver in some three and four wide schemes.  His name was Howard Twilley.  Yes, this was the same Twilley who made two clutch receptions in Miami’s last gasp winning drive the week before in Minnesota.  Shula believed the Jets would focus on stopping Warfield and Briscoe.  He believed Twilley and the number four receiver, Otto Stowe, would have opportunities for big plays. If these plays worked, Namath’s offense would spend more time on the bench while Miami controlled the ball.  The second prong involved some wrinkles with the “No Name Defense.”  Defensive coordinator Bill Arnsparger and Shula installed some new defensive coverages they believed would slow down Namath’s decision making process.  Dropping #53 Bob Matheson back into coverage was sure to disrupt some of New York’s medium-range pass patterns. And including Lloyd Mumphord as a fifth defensive back was added to the mix for a large number of defensive plays.

On the game’s first drive, Namath seemed unaffected by Miami’s defensive strategies.  Several Namath completions set up Cliff McClain’s apparent run for a touchdown.  But just before crossing the goal line, McClain fumbled.  Jets guard Randy Rasmussen fell on the ball in the end zone and the Jets had an early 7-0 lead.  The Dolphins offense sputtered in the opening quarter.  Jets fans celebrated as their defense stopped Miami cold.  But, in the second period, Griese hit Twilley with a 16 yard completion.  Then, Griese hit Warfield in stride for 24 more yards.  On third and 14 from the Jets 16, Griese was on target to a wide open Twilley and the game was tied. The three and four wide schemes were

giving New York problems.  Griese decided to stick with them.  On their next offensive series Griese threw an 8-yard completion to Warfield at Miami’s 46. Then he hit Marv Fleming for 12 yards and Otto Stowe for 18 yards.  From the 6, Jim Kiick burst through a small crease in the line for a touchdown!  The noisy Jets’ crowd became quiet as Miami tool a 14-7 halftime lead.  A Yepremian 27-yard field goal extended the Dolphins lead to 17-7.  Namath reportedly told fullback Matt Snell, “We’ve got to respond NOW!”  And respond they did.  From the Jets 47, Namath launched a high arching bomb right on the money to speedy Jerome Barkum.  Dick Anderson dragged Barkum to the turf about 6 inches short of Miami’s goal line!  Namath tried to sneak the ball across the goal line.  He was stopped for no gain.  Jets fans were roaring!  Next, Cliff McClain was STUFFED, inches short!  All-pro back Matt Snell then appeared to be stopped short, but the Jets were guilty of offsides and the ball was moved back just outside the 5.  So Namath tried a pass.  Jake Scott broke it up!  Incredibly, on fourth and goal, the Jets WENT FOR THE TOUCHDOWN!  This time, loud Jets’ fans seemed to cause their own team an illegal procedure penalty! The ball was moved back another 5 yards from where Bobby Howfield made a chip-shot field goal.  Instead of getting seven points, the Jets had to settle for three!  17-10, Miami.

On the ensuing kick-off, Mercury Morris returned the ball to Miami’s 40.  Big runs by Larry Csonka ate several minutes off the clock.  Then, a 23-yard completion to Warfield set-up a 3 yard TD run by Jim Kiick early in the fourth quarter.  It was now Dolphins-24, Jets-10.  Seemingly, Miami had the game won.  But Dolphins-Jets games almost NEVER go as planned.  Sure enough, Miami’s Charlie Leigh fumbled a Jets punt and gave them life!  Quickly, Joe Namath led New York down the field.  Emerson Boozer roared in from a yard away and the Jets trailed 24-17.  The noise from Jets’ fans was deafening!!  One fan held up a sign that said “3-1.”  But not to worry.  No miracles today.  A Garo Yepremian 43-yard field goal later in the fourth quarter sealed the deal. The “No Name Defense” stopped the Jets one more time and Miami secured a 27-17 victory at Shea Stadium.

Both sides agreed the key point in the game was Miami’s goal line stand.

“Any time you’ve got first down with 6 inches to go and have to settle for a field goal, you’ve got a problem.  It takes something out of you,” said a somber Namath.  For the day, Namath was only 12 for 25 for 152 yards and NO touchdowns.  Once, again, Larry Csonka rushed for over 100 yards.  And Jim Kiick ran for two scores.  Bob Griese outplayed Namath in this battle of future Hall of Fame quarterbacks.  His numbers, 15 for 27 for 220 yards were highlighted by four clutch receptions by Howard Twilley, including a 16 yard catch for the only passing touchdown of the game.  For his efforts, Twilley was awarded the game ball in this match-up of first and second place AFC East teams.  In the post game locker room, Shula said he was pleased to be undefeated with a two game lead in the division.  “We have a lot more winning to do,” said the Don of Miami.  Soon, very soon, the personnel Miami would use to win would change drastically.  A potentially catastrophic injury was just around the corner. The 1972 Miami Dolphins were now 4-0.