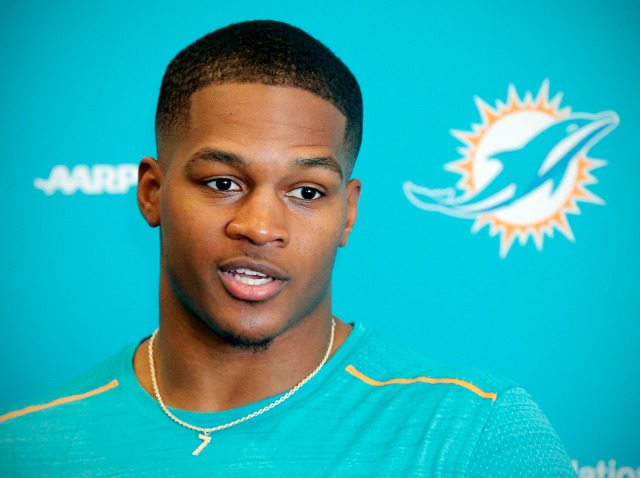 The Dolphins went back to back defense with the first 2 picks in this years draft, beginning with pick #22 DE Charles Harris. In the 2nd RD, the Dolphins selected Ohio State LB Raekwon McMillan. Boy did we need this pick. Sure, some of us liked other LB’s better, but McMillan is a potential 3 down LB who can play either inside or outside, and brings with him a good history of making tackles. Lord knows this defense was crying for just that.

McMillan was a 3YR starter at Ohio State, twice eclipsing 100 tackles, 119 his Sophomore year (57 solo), and 102 in his Junior year (49 solo). While it doesn’t appear that McMillan made a lot of unassisted tackles, he has a reputation for being a good technique tackler, who can for the most part, play sideline to sideline. While he needs to learn how to stack and shed blockers better, he’s only 20 years old, so he’ll have plenty of time to do just that. Our DC Matt Burke was formerly our LB’s coach, and I’m sure he’ll be taking an interest in McMillan, and getting him to be the best he can be.

McMillan has good size at 6’2” 240, and can certainly run well enough. He ran a 4.61 40, and put up 23 reps. He most likely won’t be starting immediately, but that doesn’t mean he won’t be seeing a fair amount of snaps. He gives the Dolphins considerably better depth, at a position that desperately needed it. Kiko Alonso, Lawrence Timmons and Koa Misi will likely be the starters provided all are healthy, but having McMillan as the next man up is reassuring to me. Yes, we have Neville Hewitt, Mike Hull, Lamin Barrow (quite right!), but none of those guys have stepped up yet. Hewitt shows some flashes, but for the most part, they all seem like backups. McMillan has good potential to be a starter, and his tackling ability may have him doing that sooner than later. Getting Timmons was a huge move. He greatly solidifies the LB corp, and will play both inside and out. On the other hand, Timmons is 31, and signed for 2 years, so McMillan will get time if he needs it, but it’s clear he was taken to be a future starter.

I’m looking forward to seeing an improved LB corps, one that won’t be the sieve it was last year. Whether it’s Timmons, Alonso and Misi, or McMillan subbed in for someone, already, things are looking up!