Are the Dolphins OK at RB? 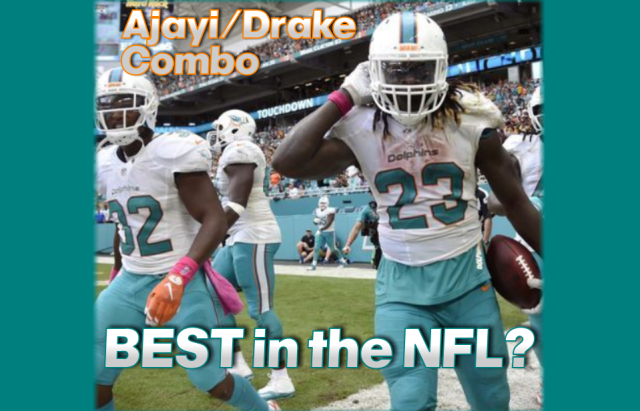 A healthy Jay Ajayi/Kenyan Drake combo could be a great combo, but unfortunately, there are now concussion concerns with our star RB.  What happens if Jay Ajayi is out for a prolonged period of time?  Do the Dolphins have enough talent in their backfield w/o Ajayi to make a playoff run?  Let’s take a look . . .

At Alabama, Kenyan Drake was never “the man”, and was always 2nd fiddle to big back Derrick Henry.  Drake had the talent, and was thought to be the guy, but nagging injuries always stole the opportunity for him.  In his Sophomore year in 2013, Drake had a nice season, carrying (his high) 92 carries for 694 yards, an impressive 7.5 YPC, along with 8 rushing TD’s.  Drake also caught 12 passes for 135 yards and 1 TD.  In his entire college career, spanning 4 seasons, Drake had a total of 1495 yards rushing.  That’s good and bad.  Bad, because he was never asked to carry the load, and good, because he should have a lot more miles left on what should be fresh legs.

Last season as a Miami Dolphins RB, Drake was used sparingly, carrying the ball only 33 times for 179 yards with 2 rushing TD’s.  Drake also caught 9 passes for 46 yards.  In comparison, Ajayi had 260 carries, so Drake was just in to spell Ajayi, no more than that.  The Dolphins also have Damien Williams, who was used in a few different capacities, as a FB, and also as a solid receiver out of the backfield.  Williams actually had 2 more carries than Drake, 35 for 115 yards and 3 rushing TD’s.  Williams added 23 receptions for 249 yards and 3 TD’s.  We also have Storm Johnson, who is on his 3rd team in 3 years, taking the full FLA tour, playing for the Jaguars, Bucs, and now Dolphins.  Also on the roster is Senorise Perry and De’veon Smith.  De’Veon is probably the only other back here with a fair amount of carries, although in college, at Michigan. De”veon Smith finished his career at Michigan with 495 carries and 2235 yards, 22 TD’s, and a 4.5 YPC.

There was a report that the Dolphins may be interested in well traveled RB DeAngelo Williams, who was a long time Carolina Panthers, and then Pittsburgh Steelers RB. Williams, now 34, can’t be expected to carry the load Ajayi did last year, or more importantly, was expected to carry this year.   Williams had less than 100 carries last year, and shouldn’t be expected for much more than that.  The Dolphins really need Ajayi, and then we need to pray that he doesn’t have any concussion issues.  You can always find a running back to help out, but it’s not likely to find one that can give you what Ajayi gave us last year, or was hoped to give us this year.

Do you think we’ll be OK?