Manitoba on a Mission

Hello All: As some of you may or may know I have had a few ‘MISSIONS” on the go this year…

Below is a tale of two of them in reverse order..

Back in the summer the wife and I decided to book a trip to Lambeau for the Green Bay/Dolphins Game on Remembrance/Veteran’s Day, which also coincided with her Birthday being 11/10.. I reached out to a couple of our “Local” Wisconsinites, to see if they would be interested in meeting up for a “Mini Fest”. Happily both Bookman and ER decided to meet up and join us, with Bookman even coming up with 4 Club Seats in the Indoor section at Lambeau.. Again LARGE thank you Sir to Mr Bookman, as the seats were awesome …

We left Winnipeg Thursday night and drove to Fargo ND for the night .. Interesting drive down as we started at sundown, and ½ ways down were driving directly into blowing snow.. It gets hypnotizing when snow is blowing directly at you as you try to see Past the

snow and watch road.. I also hate night driving at my Advanced Age .. Anyways, all good into Fargo, following morning we did some shopping and looking around for some Hemet display cases as they are quite pricey up here, as I had scored a great deal on two autographed Rice and Montana Helmets for wife’s Birthday .. Did not find in Fargo, so we hit the road for Minneapolis..

Arrived Minneapolis booked into hotel and headed to The Mall of America.. once upon a time this Mall had a Krispy Kreme assembly Line store , and a Hall of Fame Sports memorabilia Store that we were really looking forward to seeing, and scooping some Donuts .. On arrival both had closed and moved out, so we went to Dick’s Resort for dinner.. If any of you have done Dicks in Vegas, skip this one it was, along with the entire Mall a huge disappointment..

Saturday morning we lucked out at one Hobby Lobby and found 1 helmet case, and a second at a second location, so we scooped those, a table, and a cool hanging of all Super Bowl game scores for our Rec Room (Mission 1), then hit the road to meet up with ER at his restaurant Island Sushi in Appleton WI before heading to our hotel in Green Bay.

Pulled into Island Sushi and wandered in and asked for the Manager.. Gentleman at the front looks at me and says Toba ?! MR ER himself.. We chatted for a little at counter, and they he gave us the tour and history of his restaurant.. We took a table in the lounge as there were 50 people waiting to be seated in the Sushi Boat area that his lovely wife was overseeing.. my wife and I ordered a couple drinks and ER would pop in every time they arrived to steal the bill and chat a little while he kept his house in order,.. I popped out for a smoke and come back to say we gotta run, and he has ordered us Crab/Cream Cheese Ragoons << I hope I got that right .. These were absolutely delish.. Gobbled those down and decided to head for Green Bay.. Great Guy, and fabulous place he has .. If ya get the chance go try it..

Thank you to Piggie, and I believe Wyoming who posted that NYC Fins was doing a table gate on game day a block from Lambeau.. We hopped the shuttle from the hotel and agreed to meet up with Bookman, his son in law and ER and family of four..

NYC Fins was a very hospitable, Fun bunch.. Met (kinda like this place) people from NY,FL, Colorado, and all over the US.. One NY fan was wearing a Wake BC Lions Jersey , kinda cool..

After we met up with ER and Bookman we made the short Walk to Lambeau.. 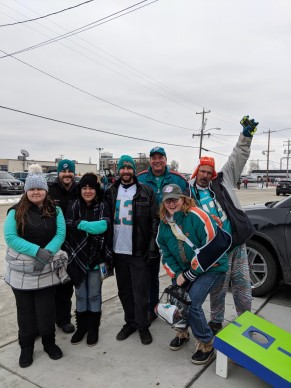 It is true that you can feel the history in the area and building.. Bookman and ER pointed

out a few interesting things about the stadium and area and its renovations .. There is a house directly across the street that is a Mini Lambeau facade.. Most seats are concrete bleachers that fans were adamant not be upgraded as it would take away from the history… Fortunately for my wife and I, Bookman had scored Club Seats through a vendor he works with.. indoor heated area, waitress service, and food available..

The game itself was mostly forgettable.. I got seated from the bar just as the snap flew over Brocks shoulder on what had been a promising looking drive.. Then we watched as Aaron and Aaron marched them down field, and then our weekly battle weary troops started falling like dominoes again.. ER unfortunately was outdoor seating and family was frozen mid 3rd ¼ and they split .. not that they missed anything, cause by then the game was over for the Dolphins..

We had a great time meeting both ER and family and sitting with Bookman pumping fists and laffing our asses off every FG.. I would like to thank them both for their hospitality and willingness to join the wife and I for the game .. 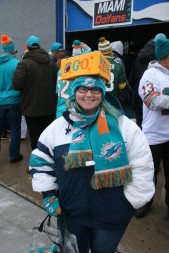 and did come home with this piece of captured headwear, so it was close to perfect despite the outcome..

The other mission I have been on since April 9th was the redoing of our Entire basement due to a flood from a broken Water Meter gasket.. When we got back from Hulk Fest we found the contactor had finally finished his portion and we could now start the decorating and moving back in process.. I give you.. “Our Rec Room”… 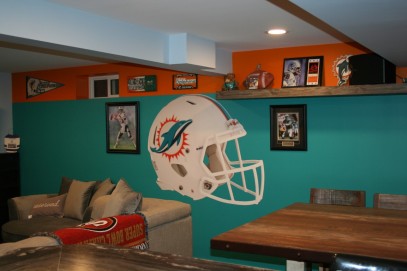 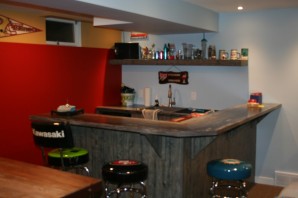 Hope some of you enjoyed the stories and photos..

I am not a Super Fan.. I am just a fellow Blogger who happens to love his team and wish constantly for them to turn the corner to Prosperity .. May it happen soon.. 5-5 and still in the Hunt , despite all the injuries.. a lot of the injured WILL be back next year.. Maybe we sneak in the playoffs maybe we don’t… all Ii know is It’s Been a Helluva Ride …

236 Responses to Manitoba on a Mission