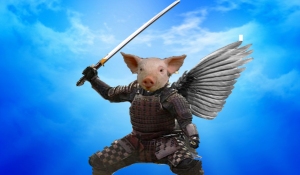 PIGGY, GPS, WEDGE, MUSTACHIO AND THE LITTLE PRAWN ARE ALL SITTING TOGETHER AT A SEAFOOD RESTAURANT

The Flying Pig: Squeal! Everything has gone wrong lately

Psychic GPS: Come on Piggy, we are sitting here together to forget about the last few weeks 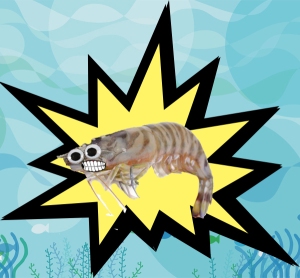 Psychic GPS: We can forget about the fact that we are less likely to bring a Samurai in now that we signed two wide receivers in free agency

Psychic GPS: We can forget about loosing Jake Long to the Rams

Psychic GPS: We can forget that your bojangles are on the line this season

Psychic GPS: We can forget that Wedge’s fake girlfriend died

Psychic GPS: We can forget that Wedge was actually in love with a man

Psychic GPS: We can forget that Mustachio’s wife is two timing him with another razor

Psychic GPS: We can even forget that Colonpokey’s shoebox was robbed! And some one took his body. ELECTRONIC SCREAM! That one freaks me out!

The Flying Pig: So shut up already and stop reminding us GPS. Let’s just eat! (holding up his new Katana – the Ham Slicer) At least I have this new Katana!

Psychic GPS: Piggy, stop playing with your sword…here comes the waiter…guess what, this is a seafood restaurant, so there is no pork on the menu. We can all enjoy seafood, no?

Mustachio: Look at the balordo at the table next to ours! I’m going to lose my appetite watching him eat

THE GROUP ALL TURNS TO THE TABLE NEXT TO THEIRS WHERE THEY SEE A MAN EATING LIKE A PI…EH….A SLOB…THE SLOB IS SITTING WITH AN ATTRACTIVE WOMAN

Wedge: What a slob!

THE WAITER COMES TO THE TABLE AND LOOKS AT PIGGY

The Waiter: Are you ready to order?

The Waiter: Well, the shrimp is really fresh today…

The Flying Pig: Okay, I will have the shrimp scampi

The Waiter: (turning to GPS) How about you?

The Waiter: excellent choice (turning to mustachio) How about you sir?

Mustachio: I will have the fettuccini…with shrimp…

Mustachio: Fe-tu-ch-i-ni…It comes from inside! You are murdering my beautiful language (sigh)

The Waiter: (ignoring Mustachio) And You Mr. Alien.

Wedge: Oh, I will just have a salad…

Wedge: Oh, and throw some grilled shrimp on it…

The Waiter: (turning) And you…eh…sir..eh what would you like?

The Waiter: (letting out a fake laugh and pretending to hear the Little Prawn) Um…okay…what was that?

AT THE TABLE NEXT TO THE GROUP’S TABLE

The Slob: (stuffing food in his face) it’s so good!

THE SLOB TURNS TO THE GROUP AND NOTICES THE LITTLE PRAWN

The Slob: (grabbing the Little Prawn) Hey, you going to eat that?

Wedge: What the fuck! That is our friend!

Mustachio: Stronzo! You ate him! (making an obscene gesture)

MEANWHILE, INSIDE THE BELLY OF THE SLOB

The Little Prawn: Where am I? What is this Pit?

A HALF EATEN SCALLOP REACHES OUT TO THE LITTLE PRAWN

The Half Eaten Scallop: Brother…(struggling to speak) You are in the pit of despair, a place where shellfish spend their last days…(gasping) Soon, you will begin to hallucinate, the pit will control the way you think and your actions, and then (gasping) you will die brother…I am sorry. I am…I am..I am dying now…

The Little Prawn: I have been eaten! That slob! That bastard! What kind of scoundrel eats a prawn! I will not succumb to the pit! I am the Little Prawn. I have defeated many humans before The Slob. I must find a way out of this pit…what would a Samurai do….what would Tavon Austin do?

THE STOMACH A.K.A THE PIT OF DESPAIR SHAKES VIOLENTLY

MEANWHILE, OUTSIDE OF THE BELLY OF THE SLOB, WEDGE, GPS AND MUSTACHIO ARE ALL KICKING THE SLOB WHILE HE IS ON THE GROUND

The Flying Pig: (flirtatiously) Since I saw you tonight…

Wedge: I think that was a minor earthquake?

Psychic GPS: Somebody must be talking about Samurai!

Mustachio: Oh Mio Dio! It’s the Little Prawn. He must be talking about Samurai now!

Psychic GPS: We need to free him!

The Little Prawn: If Tavon Austin was here he would take his 114 catches this year and burst through this pit! 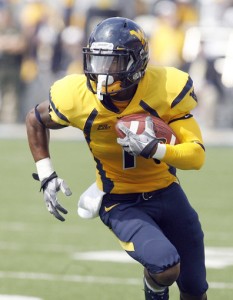 The Half Eaten Scallop: Brother…you cannot fight it…

The Little Prawn: Nonsense…I like the Samurai cannot be defeated! Did you know that Tavon Austin had over 1900 total offensive yards last year. Over 600 rushing and almost 1300 receiving. He did both! You know why? Because a Samurai is not defeated by a position change from running back to wide receiver. A Samurai just just takes his skills and slices through positions!

MEANWHILE OUTSIDE THE BELLY OF THE SLOB, THE EARTH IS SHAKING SO VIOLENTLY THAT PLATES ARE FALLING OF THE TABLES AND CRASHING ON THE GROUND. WEDGE IS HOLDING THE SLOB UPSIDE DOWN BY HIS FEAT. GPS IS STICKING A FORK IN HIS EAR. MUSTACHIO IS TICKLING HIS FEET

Mustachio: Piggy, are you sure this is how they perform the Heimlich?

The Flying Pig: Yes, you guys got it (laughing and leaning back in his chair)

The Flying Pig: I’m your little Piggy now! (Piggy stands up and punches The Slob in the nose)

The Little Prawn: Austin put on quite a show at the combine! A Samurai always pus on a show. He caught nearly everything in the receiving drill showing he is not simply a speedster.

THE BELLY SHAKES SO MUCH, THE LITTLE PRAWN TURNS UPSIDE DOWN 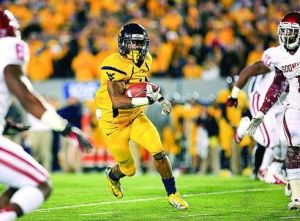 The Half Eaten Scallop: Brother…it is working…you grow stronger every word you say

The Little Prawn: That is because I speak of Samurai (trying to hold his balance as the stomach shakes) And not just any Samurai – Tavon Austin…A Samurai so great, his spirit is worshiped by other Samurai!

MEANWHILE OUTSIDE OF THE BELLY OF THE SLOB, THE EARTH SHAKES SO MUCH SMALL PIECES OF THE CEILING ARE FALLING TO THE GROUND. THE PATRONS OF THE RESTAURANT ARE ALL HIDING UNDER THEIR TABLES, EXCEPT FOR PIGGY, GPS, MUSTACHIO AND WEDGE WHO ARE ALL VIGOROUSLY BEATING THE SLOB

The Flying Pig: Bring me the Ham Slicer! We will cut the Prawn out of him!

Psychic GPS: (restraining Piggy) No Piggy! You don’t want to go to prison for murder. Let’s force this slob to vomit (jumping on his stomach)

The Little Prawn: 4.34! 4 point freaking 34! I will use my speed like the elite speed of the Samurai and shoot up through his esophagus and out into the world for my vengeance! 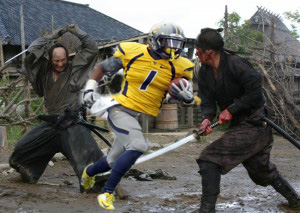 MEANWHILE OUTSIDE OF THE BELLY OF THE SLOB, THE EARTH IS SHAKING. THE FLOOR OF THE RESTAURANT CRACKS OPEN AND SWALLOWS SEVERAL PATRONS UP.

BUT WEDGE, GPS, PIGGY AND MUSTACHIO DON’T EVEN NOTICE. THEY ARE ALL JUMPING ON THE SLOB’S STOMACH

Wedge: This reminds me of John Travolta!

The Flying Pig: What?

THE SLOB COUGHS OUT THE LITTLE PRAWN. HE FLIES ACROSS THE ROOM AND HITS A WALL. HE STANDS UP GRABS THE HAM SLICER AND WALKS TOWARDS THE SLOB

The Slob: (Helping himself off the ground and begging) Oh please little shrimp…I didn’t know you were so…so…so….Samuraific!

THE LITTLE PRAWN SWINGS THE KATANA AND BE-HEADS THE SLOB

The Little Prawn: They call me PRAWN!

The Waiter: (running towards the Little Prawn) You killed him! Some one call the police)

The Little Prawn: Thrusting his sword into the waiter’s stomach) And I ordered Mahi Mahi you son of a bitch!

Wedge: Maybe we should go

PIGGY, WEDGE, GPS, MUSTACHIO AND THE LITTLE PRAWN RUN OUT OF THE RESTAURANT AS SIRENS CAN BE HEARD IN THE BACKGROUND

Like Loading...
This entry was posted in The Porcine Oddyssey and tagged Austin, Samurai. Bookmark the permalink.