STELLA AND GUINNESS, TWO ALIENS, WALK INTO A BAR AFTER A LONG DRIVE

Stella: Guinness, promise you that you won’t get drunk again…

Guinness: Okay…I promise I won’t get drunk…(laughing)…because I am ready am drunk…wooooopeeeeeedoooooo bitches! 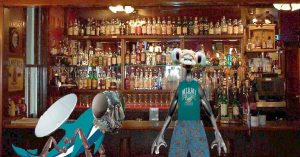 Stella: What we just got here?

Guinness: You do the driving, and I do the entertaining. Hey, look at that chick (Guinness sits next to a woman drinking alone at the bar) Hey there beautiful, want to play with my terrestrials?

Stella: Okay about the NFC South…

Stella: The cool thing about these teams, is that they all play the Dolphins this year, starting with the Falcons in week 3. It won’t be an easy game, the Falcons have become perennial contenders since 2008.

Guinness: Oh enough about the Falcons! I remember it well, 2007 a miserable season, Bill Parcells turns down a job with the Falcons to come to Miami, then Parcells takes Jake Long over Matt Ryan, and the Falcons nab Ryan…fuck the Falcons

Stella: Lets try to be impartial for a few minutes…The aforementioned Matt Ryan ad his best season last year, the Falcons really opened up that passing game and why not when you have receivers like Roddy White and Julio Jones. The Falcons made it an offseason priority to re-sign Tony Gonzalez and they did that – so I would expect that passing game to be just as explosive

Guinness: Steven fucking Jackson…(to the woman sitting next to him who ignores him) right?

Stella: Good point Guinness. The Falcons let Michael Turner go but added Steven Jackson, sort of the same type of workhorse back. And they also added Osi Umenyoira do bolster that pass rush

Guinness: They need it! They were 24th in the league last year in yards against per game. They aren’t going anywhere in the post season…and we took their fucking Grimes

Stella: That’s right Guinness they lost a very good CB in Brent Grimes and a very good RT in Tyson Clabo. Both are with the Dolphins now.

Guinness: They need it! They were 24th in the league last year in yards against per game. They aren’t going anywhere in the post season (Guinness turns to the woman next to him) Hey, what’s your name? (she continues to ignore him)

Stella: One thing notable about replacing Grimes, they drafted two CBs with their first two picks. Two good CBs in Trufant and Alford. Turning to the Saints,

Guinness: Who knows what to expect with the Saints!

Stella: Turning to the Saints…

Guinness: Who knows what to expect from the Saints

Stella: It was only a few years ago,, when they won the Super Bowl, but the let few years…Well, you can expect Drew Brees to put up big numbers, but it would’t hurt if he cut down on the interceptions. The other thing about the Saints is they get their Head Coach back, so maybe they can put it back together. I think in order for the for the Saints to do anything, they need to get more production out of Mark Ingram who has been a bit of a disappointment in his first couple of years in the NFL.

Bartender: Anna you want to close your tab (to the woman)

Anna: Yes, I think its about time for me to le…

Anna: (under her breath) Oh my god, I have to get out of this place

Guinness: No, no…let us cuddly aliens buy you one drink…

ANNA AGREES TO STAY FOR A DRINK

Stella: You know the Panthers are an interesting team. Cam Newton had a rough start last season, but he really turn it on late in the season…he helped me win my fantasy football league

Guinness: But here is another team, that has to get better defensively…particularly on the defensive line.

Stella: The drafted Star Lotulelei and Kawann Short with the first two picks of the draft. Two DTs, that is somewhat unusual and they have a good young LB in Like Kuechly. I expect them to be much better defensively. There depending on a lot of young players to get t the next level, they didm;t spend a lot in free agency this offseason. Sort of like the Buccaneers (laughing) who paid very little to the injured Darrelle Reavis

Stella: I’m just kidding. He signed a six year 96 million dollar deal – which is insane money for a CB. But the good new is none of it is guaranteed. So I guess the Bucs can cut him if it comes to that, but they can’t get that 1st round pick back. I’m guessing the Bucs were desperate to improve in their secondary this offseason since they spent their first pick of the NFL draft on another CB, Jonathan Banks. When it is said and done, I really don’t think the Bucs do anything in 2013 unless Josh Freeman becomes a little more consistent. Don’t you agree Guinness…Guinness???

STELLA LOOKS OVER AS SEES GUINNESS MAKING OUT WITH ANNA

NOW FOR A SERIOUS WORD FROM PIGSGERALD BACON (PIGGY)

The Flying Pig: Humans and other readers. We live in tense times. It has come to my attention, that some humans have elected to fight with their brothers and sisters and spread hate. Now is not the time for humans to fight. Humans should be banding together, brother and sister together. So look to your left and right, reach out your hands – take your brother and sisters by the hand…then take your humans by the hand…walk them into the kitchen…towards the oven…set the over two 200 degrees…

The Flying Pig: (Piggy comes back in to the room) Oh and one more thing…

PIGGY FARTS AND LEAVES THE ROOM