With the OL injuries is there a viable FA pick-up out there or are we waiting on the cuts/waiver wire?

I doubt that there is a a lineman available now that would be any better than the guys we already have.  Once the cuts start, there may be a couple we bring in for a look-see, but don’t expect any magic.  I think we’re going with what we’ve got, but may bring in a guy or two for depth if Louis is on the PUP, and Jerry is still hurt.  Thomas or Samuda will probably start, and the guys we bring in will be depth on the line.

Q – What is your favorite football food? 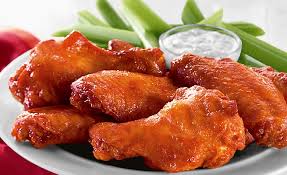 Nothing like good ‘ol delicious Buffalo Wings.  I can’t think of anything I’d like better than, a big plate of hot wings, cold beer, and the Dolphins winning.

True story.  I was 21, and I went up to Utica, to visit one of my best friends, Dave, at UticaCollege.  He was a frat boy, so naturally, he lived in a frat house.  One night, we go to this bar (This is 1984 BTW), and we get a few pitchers of beer, and these things called “buffalo wings”.  I never had them before, and upon my first taste, it was unlike anything I had ever tasted before.  The heat was tremendous, these were spicy, and I was just overwhelmed.  Then, I just couldn’t stop eating them,  they were so delicious.  So salty, spicy, and completely different than anything I had ever tasted.

I grew up in BrooklynNY, and at that time, buffalo wings were nowhere to be found.  Every now again, a restaurant would introduce wings, but never, and I mean never were they like the authentic wings I had upstate NY.

I remember in 1986, when the Mets were bulldozing the NL in search of their 2nd World Series crown, we went to a bar in Manhattan called Jimmy Day’s.  Jimmy made some serious Buffalo Wings, and that was the place to go get ‘em.  We were there for the infamous Game 6, when poor Billy Buckner had his life changed forever.  I’ll never forget squinting at the small 25” TV from a mile away at our table, after imbibing many pitchers of beer, NBC flashing the graphic that Marty Barrett of the Boston Red Sawks has been named WS MVP.  I also remember emitting a cavemanish, guttural scream in response to that (In a Brooklyn accent of course), something to the tune of “FUUUUUUUUCK DAAAAAAAAAAT!!!!!”  “Da fuckin series ain’t over yet, you FUUUUUUUUUCKS!!!!!!!!!”

T.G.I.Fridays started popping up (Not in Brooklyn though), and they made legit buffalo wings.  I have to tell you, for years I was like a pregnant woman searching for pickles.  No one made legit wings, and I used to get these powerful cravings for the salty, spicy wings.  It was HORRIBLE!

This is boulder. My question is. how important do you think is this year for philbin’s future as dolphins head coach? And what do you think our record needs to be for Ireland to keep his job?

Did you know that Buffalo Wings originated in BuffaloNY.  Oops, sorry Boulder, I keep thinking about buffalo wings.

I think it’s very important for Philbin to create a winning culture here.  I think the pieces are in place for it to happen, but the development of young QB Ryan Tannehill is the most important cog in the machine.  Tannehill must become a force, and he must throw TD passes.  I don’t see any reason this doesn’t happen, but I think our defense will be a top 10 defense.  I think our offense better be in the top half.  It doesn’t need to be top 10, but it has to be in the top 16.

I made a prediction a long time ago that Tannehill would throw for 3500 yards, with 25 TD’s and 15 INT’s, and complete about 60% of his passes.  That should be enough to get us to that point.

We can’t be a letdown this season.  My feeling is we should win 10 games this season, and anything less would be a disappointment.  Ross seems to really like Ireland, so I wouldn’t rule out 9-7 being enough for Ross to keep him around.  In my book, we need to win 10 games, but Ross may be pacified with 9.

I am an aspiring lumberjack. For my first axe purchase, I am currently torn between a Granford-Bruks splitting maul with a 36″ handle, a Wetterlings full sized felling axe and an Estwing Black Eagle double bit. What do you recommend, and why? Also, could you please feature Monty Python’s “The Lumberjack Song” in a future column. Thank you in advance for your time.

Who is your favorite Dolphins Cheerleader, and why?