Mustachio: Scusami Piggy, Why we are driving away from Cleveland?

The Flying Pig: Mustachio, I would rather eat a bowl of glass shards than spend another minute in the mistake by the lake.

Mustachio: Porca troia, Piggy, we are going to miss the game!

The Flying Pig: Don’t worry Mustachio, we are just taking a side trip to the Hall of Fame in Canton. Just think we get to see the Hall of Fame busts of Shula, Marino, Langer, Buoniconti, Langer, Stephenson, Warfield, Czonka, Little…. 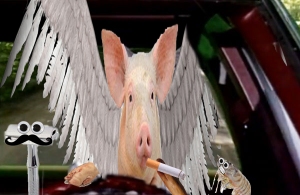 Mustachio: Okay, we can see the Thurman Thomas bust, and then we can go, but che palle Piggy, we should’t push it too far so we don’t miss the game.

The Flying Pig: We will be there soon Mustachio…just enjoy the ride…take after The Little Prawn, he has no complaints…

Mustachio: Okay Piggy…eh too bad Wedge and Psychic GPS aren’t here to see the game. I hope they are going to enjoy it on TV, I wonder what they are up to right now

BACK AT THE BARN WEDGE AND PSYCHIC GPS ROLL A GURNEY INTO THE BARN. BIONIC COLONPOKEY IS ON THE GURNEY

Psychic GPS: (pushing the Gurney in) Okay come on let’s get this over with

Wedge: If Piggy finds out we are helping Colonpokey, he is going to be furious

Bionic Colonpokey: Beep Beep thank you for helping me GPS and Wedge Beep Beep. I can’t believe they have made me half machine…

Psychic GPS: Its the least we can do for you Colonpokey…we thought you were dead

Bionic Colonpokey: Beep Beep Thanks GPS, if you ever need to be sodomized, I am your rodent!

Bionic Colonpokey: Beep Beep, Wedge, Do whatever you need to to remove this bionic technology. I need to win Sanchez back, and I can’t do it if I am only half a hamster.

Psychic GPS: Are you sure about this Colonpokey? We aren’t surgeons or anything

Wedge: Quit, being so nervous GPS, I’ve seen this sort of stuff done on TV before.

WEDGE BRINGS A CHAINSAW OUT AND STARTS IT

Psychic GPS: Are you sure that is the right tool for this?

Wedge: Now Colonpokey this will only sting for about a month or so

Bionic Colonpokey: Beep Beep a month? Beep Beep wait a second maybe we should’t do this

BACK IN OHIO INSIDE THE HALL OF FAME

The Flying Pig: Ah, here we

The Flying Pig: Yes, I am speechless too

The Flying Pig: Have no fear Mustachio. We are on the right path now. We are becoming a passing team, and in this day and age you have to be able to throw the ball to win. As a matter of fact the Browns remind me of the team we used to be under Sparano.

Mustachio: Come Piggy? What do you mean?

The Flying Pig: Well, remember 2008 when we drafted Jake Long? We passed up a franchise QB in Matt Ryan

Mustachio: Everyone knows that Piggy. (a tear falls from Mustachio eye) The Dolphins ended up looking like Mrs Mustachio that mignotta! They took it up from behind on that one! (Mustachio spits not he floor)

The Flying Pig: Yeah, in hindsight I guess Matt Ryan should have been the pick…but we wanted to be a big physical team so we took Long with our first pick and a QB with our next pick

The Little Prawn: Chad Fucking Henne! (the Prawn punches Piggy in the gut)

The Flying Pig: Squeal! (helping himself up) I know . My point is, we did that in 2008, but the Browns did something similar in 2012. They took Trent Richardson, a bruising high carry running back, over Ryan Tannehill. The we nabbed Tannehill. The Browns took Weeden with their next pick. You see what I am Oinking? Richardson is the Browns’ Jake Long

Mustachio: And Weeden is the Browns’ Henne (Mustachio spits not he floor)

The Flying Pig: Who is that?

Mustachio: Over there Piggy! (pointing to a shadowy figure behind the curtain)

The Flying Pig: Who are you? Reveal yourself! Why do you mock my Oinks?

The Voice: Piggy, I am surprised you don’t recognize my voice, its been so long.

THE LITTLE PRAWN DOES A BACK FLIP UP TO THE CURTAIN AND QUICKLY TAKES THE CURTAIN DOWN. DUKE GOODELL IS BEHIND THE CURTAIN. HE COVERS HIS EYES FROM THE LIGHT THAT SHINES ON HIM

The Flying Pig: Duke Goodell! You bastard! I thought you were in Foxboro?

Duke Goodell: I have other duties Piggy, I can’t spend all my time cavorting with the Patriots

The Flying Pig: Why do you mock my Oinks?

Duke Goodell: (laughing) As long as I am the Commisioner of the NFL, the Dolphins won’t win anything…The Patriots will always wing he AFC East

The Flying Pig: You bastard! Not this season. This season the streets of Foxboro will be flooded with Brady’s blood when Cam Wake, Olivier Vernon and Dion Jordan get through with The Cheats!

Duke Goodell: (laughing) Hah Hah Piggy. There are forces at play that even you cannot understand…Maybe its best to express it in a song.

DUKE GOODELL GOES BEHIND THE CURTAIN AGAIN AND HE CAN BE HEARD CHANGING. THE MUSIC FROM ABBA’S DANCING QUEEN CAN BE HEARD IN THE BACKGROUND

Duke Goodell: (singing) You come in to look for a king. (He spins) Any receiver could be that guy. Its only the second quarter. With a bit of help from the refs, everything is fine.

Duke Goodell: (singing) You’re in the mood for a prance. And when you get the chance. You are the prancing queen. Old and savy, past thirty prancing queen, feel the beat from the tambourine, oh yeah

Duke Goodell: (singing) You can prance, you can jive, Having the time of your life Ooh see that Brady, watch that scene, Diggin’ the prancing queen

The Flying Pig: Enough! You are desecrating the history of this great game!

Duke Goodell: Yes I am! One step closer to a video game every year!

Mustachio: Piggy, we should go back to the game now…

The Flying Pig: Okay, let’s get out of tis place!

Mustachio: One thing…before I go Duke, would you like to see my impression of D.J. Swearinger?

Duke Goodell: I guess so. But make it quick there is a Nose Tackle waiting for me that I am dying to hug and kiss.

Mustachio: Okay here it is

MUSTACHIO DOES NOTHING FOR ANOTHER MINUTE

DUKE GOODELL TURNS AROUND AND BEGINS TO WALK AWAY. MUSTACHIO PULLS OUT A CROWBAR AND STRIKES GOODELL IN THE KNEES AS HE IS WALKING AWAY 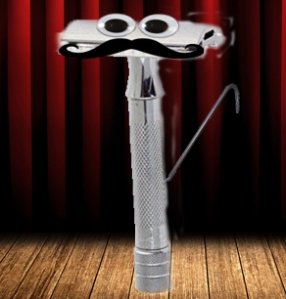 SOMEWHERE ELSE, IN THE CLOUDS, FAR AWAY, THE PEGASUS COUNCIL MEETS. THE COUNCIL, COMPOSED OF PEGASUS, A GREEN DRAGON AND A GREAT GRIFFIN ARE SITTING AROUD A MINIATURE REPLICA OF AN ANCIENT ARENA. THERE ARE SMALL MARBLE STATUES AROUND THE ARENA.

Pegasus: Dragon and Griffin esteemed members of the Pegasus Council headed by myself…of course…I called this meeting on the eve of the NFL Season. As you know my Patriots have dominated the AFC East, a pompous fat pig has challenged this notion by suggesting his Dolphins will win the AFC East this year. That will change the Council as we know it! We cannot let that happen.

Dragon: What is in it for my Jests?

Pegasus: Dragon, the Jests are destined to suck this year. There is nothing I can do for your Jests…but you can enjoy my attempts to sabotage the Dolphins…

Dragon: Well I guess I can…

Dragon: I will do it (under his breath)….how bout a “kill” stat?

Pegasus: Perfect! And Griffin are you on board? It shall be beneficial to the Bills as well.

Dragon: I guess that is a yes….

Pegasus: Great! My intern is putting together facts about the Dolphins, their opponents and of course, Piggy – that oinking son of a bitch

Dragon: You have an intern…

Pegasus: Yes. (laughing) He thinks I am going to put him on the council…he is a fucking inchworm! I am just going to make him do all this work and never pay him. Interns are great!

THERE IS A KNOCK ON THE DOOR. A PENGIN GUARD OPENS THE DOOR.

Penguin Guard: Your winged highness, there is a worm here to see you with a stack of files.

Pegasus: Let him in. (looking at the worm) Ahhh, The Flying Inchworm. Come (waiving the worm over with his hoof) Come. What did you find?

The Flying Inchworm: A lot. (Placing a stack of papers on the floor) I’ve been up for four days now researching this stuff. Did you know Piggy doesn’t like wearing pants (shaking his head)

The Flying Inchworm: Um…I was kind of hoping to get some rest…

The Flying Inchworm: Yes, since I was a larvae.

Pegasus: Well, it takes hard work (pushing him out the door) Now go get more information. (closing the door)

PEGASUS WALKS TO THE REPLICA ARENA. HE PLACES A STATUE OF A FLYING PIG IN THE ARENA.

Pegasus: Now Piggy…let’s see what your Dolphins can do this season. (He lets out a loud whinny)