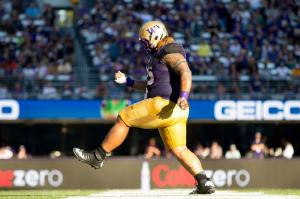 Don’t get so too close to the Shelton Joe Philbin!!!  Purportedly, the Dolphins have shown real interest in Washington Defensive Tackle Danny Shelton.  So much so Senior Bowl security had to ask Coach Philbin to step back.  Well, truth is the Dolphins are not the only team intrigued with Shelton.

Given his siz,e its no surprise that people are comparing Shelton to Vince Wilfork and Haloti Ngata.  Get excited – this is the guy that can be the centerpiece for some one’s defense for a decade.  An elite run stuffer!  A guy who you just can’t move.  Do you hear that?  That is the sound of Danny Shelton eating an offensive line…..offensive line so tasty.

But is he more than just an immovable force?   In his Senior Year at Washington Shelton had 9 sacks.  Word has it – his moves are pretty much limited to a bull rush.  He just overpowers the interior offensive line.  Get out of my way!!!  I’m Danny Shelton and I am going to crush Tom Brady’s spine!  Um…I just imagine that is what he would say…dare to dream…

Shelton shows impressive quickness and agility for a guy his size.  In fact Shelton is a member of the Huskies track team.  No, don’t worry, he is not a pole vaulter.  He competes in the discuss throw and shot put, another tribute to his incredible strength.

There are no guarantees that Shelton is a great pass rusher at the NFL level.  But run stuffer?  Most scouts seem to think if you draft Shelton, you can get a decade of run stuffing from this reliable space eater.  If I was going to compare Danny Shelton to an Alien Weapon of Destruction I would compare him to a The Great Black Hole of Xvorkkia Nebulas 4.  Go ahead try to go into the black hole – no one will ever see you again!