Oh…excuse me Earthling, I didn’t know you were there.  I was just polishing my ship’s self destruct button.  There is nothing more reliable for organism death than a self destruct button right?  I cover the label with a little tape that reads “turbo” and let another alien borrow my ship.  Well you can guess what happens when they want to go fast.

Enough about polishing weapons though…instead, let’s talk about polished receivers.  Is there any receiver in this draft more polished than Amari Cooper?

Cooper does everything well!  He catches the ball well, he runs fast, he runs clean routes, he attacks the ball in the air, he’s quick, he’s physical.

During the College football season, most experts expected Cooper to be the first receiver off the board.  But lately – not so much.  So what gives?  Well Probably nothing, teams have probably just become a little more enamored with bigger and faster receivers.  Cooper is probably still the most NFL ready receiver in this draft.

Cooper was extremely productive at Alabama.  In three years he compiled 3,463 yards and 228 catches.  He had an eye opening 31 TDs as well.  Impressive right?  Cooper’s actually been the Crimson Tide’s #1 receiver since he was a freshman in 2012.  Considering the incredible talent at Alabama, that’s a heck of an achievement.  Cooper’s career was capped off as a runner up for the Heisman Trophy and the winner of the Belitnikoff Trophy. 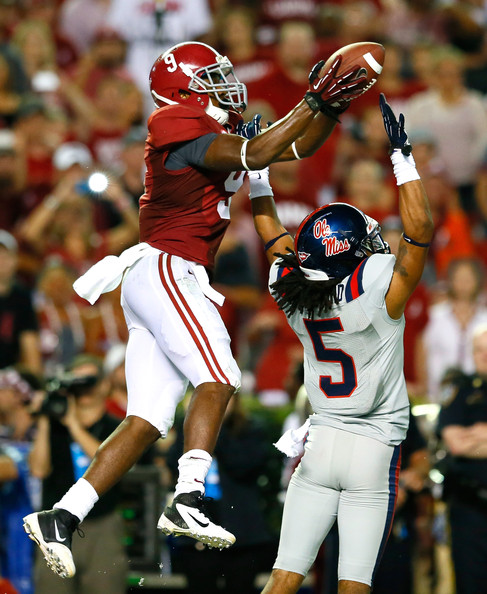 Expect Cooper to make an immediate impact in the NFL.  What I really like about Cooper is his physicality.  He’s not afraid to mix it up with DBs and sometimes in the NFL, that is what it takes.  You don’t hear as much about Cooper’s combine or Pro Day numbers, but he did run a 4.42 40 yard dash.  He also had the top performance at the combine in the 3-cone drill and the 20-yard shuttle.  Cooper is very agile.

Somehow all these numbers haven’t been talked about as much as the Kevin White or Breshad Perriman numbers.  Which is why Cooper is a sneaky but reliable weapon.  Kind of like that Self Destruct Button I was polishing.  If Cooper was an Alien Weapon of Destruction he would be a Tricky Self Destruct Button.

“Hey Bob, want to take my new ship out for a drive.  You are gonna love the Turbo Speed!”