Rejoice Dolphins fans! Dan Campbell found all these talented, hungry players in one week! It’s amazing that he was able to turn over the entire roster and bring in all these great players in such a short time. Astounding. What’s even more unbelievable is that all these players happened to be on our roster, just waiting to break out. OK, so that’s not really what happened. Or is it?

I’ve always felt that Joe didn’t have his team prepared, and when I say prepared, I don’t mean they didn’t understand what they had to do, or where they had to go, but I mean HUNGRY, and EAGER to do it. There were a handful of games under Joe Philbin’s tenure that I felt that our team was the hungrier team. The fact is, we SAW what hungry was last week, and SAW how good this team can be when they play hungry.

Let’s start with the offense. A renewed commitment to to the running game paid dividends last week. I know we all called for it, but finally, someone told the other coaches that we have to do it, and stick with it no matter what! Lamar Miller ran for 113 yards on 19 carries. Jonas Gray added another 24 yards on 7 carries. Jarvis Landry had a beautiful run, a determined run for 22 yards and a TD on the Statue of Liberty play. He probably should have had about 16 yards, but he fought through 3 defenders and willed his way to the end zone. Tannehill added another 14 yards on 2 carries, and Damien Williams had 2 carries for 5 yards. Why bother listing all the carries and yards? I’ll tell you why! 32 carries and 180 yards rushing, with a nice 5.62 YPC is precisely what this offense has been missing. We’re not going to be able to 30 times a game, and we won’t always have success at over 5 yards a pop, but a commitment to staying with the run game will always make it easier on our offense. 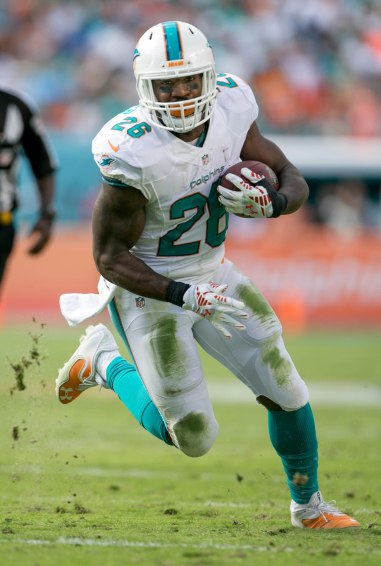 Ryan Tannehill wasn’t perfect, there were a few head scratching throws, especially a couple intended for TE Jordan Cameron. He did throw a beautiful deep ball right in stride to WR Kenny Stills down the left sideline. That was a pretty throw, but there’s no question that the threat of the run game makes throws like that happen. There HAS to be balance. In our first 4 games, we never had more than 20 carries, and only reached 20 carries once. We narrowly missed achieving half our season’s rushing total by a few yards. Before this past Sunday, we had 277 yards rushing on 65 attempts. We just missed getting almost half of our carries for the season by 1 carry. Ridiculous!

The defense wasn’t perfect either, but the pass rush finally came alive, proving that you have to be hungry to succeed. Shame that these high priced athletes can just turn the switch ON or OFF at will depending who is in charge, but clearly, that is the case. Of course Cam Wake’s hamstring injury was hampering him all year, but his switch was OFF with Joe Philbin in charge. He’s one guy that can make the defense go. Suh is a monster, but he has never been a guy that takes over a game. Cam Wake, on the other hand has, and can be that guy. When he’s in “relentless” mode, he’s hard to stop. When opposing offenses have to worry about Wake, all of a sudden, there are opportunities for everyone. Wake erupted for 4 sacks, and Olivier Vernon added one, and Jordan Kovacs well timed safety blitz added another. 6 sacks in one game, and we had just one sack all season. I can be angry with Joe Philbin as much as anyone, but it’s obvious these players weren’t trying. We didn’t change scheme as much as we changed philosophy. We went from going the motions to making plays and playing a brand of physical football I only hope we can continue playing. 6 sacks, 2 INT’s and 2 FF’s. Not too shabby.

This week we face a Texans team that we have struggled against historically. We’ve been in almost every game against them except for the most recent one in 2012, where we got blown out 30-10, otherwise we lost by a total of 7 points in the first 4 games. This year, the Texans are struggling as much as we were, at 2-4. Arian Foster has not been the Arian Foster previous to this year, and has played only 3 games, and is 3rd on the Texans with 104 yards. Alfred Blue leads the Texans with 226 yards on 57 carries. The Texans have flip-flopped QB’s this year with Brian Hoyer and Ryan Mallett. Hoyer has been the better QB statistically, completing 63.4% of his passes with 8 TD’s and 2 INT’s, while Mallett’s struggled, completing only 53.1% with 3 TD’s and 4 INT’s.

I’m coming for you Piggy!

Brian Hoyer will start this week, against the Dolphins, and their renewed defense. Arian Foster will be starting at RB, and the very dangerous Samurai DeAndre Hopkins that a certain little Piggy knows very well brings his 52 receptions and 726 yards along with 5 TD’s. I believe Cecil Shorts III will be out for the Dolphins game, so veteran Nate Washington will get the start. This is the “Fest Game”, so hopefully the same that played last week shows up in Miami, so our boys and girls can have a little celebration after winning, and getting back to .500! I hope you all enjoy the Fest, win or lose, but hopefully, a WIN.