Looks like I picked the wrong week to give up linebackers…

Or did I…What is Eric Striker?

Is he a linebacker…is he a defensive end…or is he a safety?

I don’t know.  And that makes Eric Striker a perplexing prospect.

Eric Striker is a scary prospect to many scouts.  And that is probably why he may not be drafted in the first two days of the draft.

But does that make him a bad football player?  Surely you can’t be serious human?

I know I know…don’t call me Shirley….

Eric Striker is the type of impact prospect a lot of teams will regret passing.  But you can kinda understand why teams will pass on him early.

Like may prospects, you will hear a lot of different reports on his height and weight.  But I think its safe to assume he is somewhere around 6’0, 220-230 lbs.  Not exactly very big for a a pass rusher.

So can he be a safety?

Um…I don’t think so.  That’s because Eric Striker spent most of his time at Oklahoma rushing the passer. 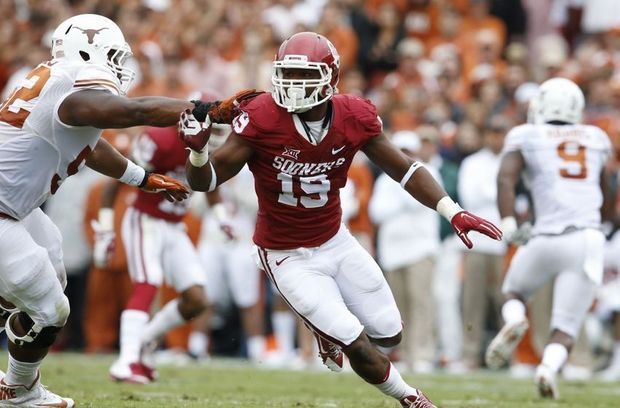 And rushing the passer well… Eric Striker had 22.5 sacks in the last 3 years.

He was always causing havoc in the the backfield, even when he wasn’t sacking the quarterback.  Eric Striker had 45 tackles for a loss in his career at Oklahoma.

He had 191 total sacks in his career…I mean tackles…sigh…looks like I picked the wrong week to give up sniffing some particles.

Think about that – over 20% of his tackles were for a loss.  He was always making big plays for the Oklahoma defense.  Those kind of impact plays helped Oklahoma get into the College Playoffs this year.

Ask texas QB Case McCoy if he thinks Striker is too small to be a pass rusher.  Let me know what he says if you can understand it through the blood he is gargling.

Maybe Striker doesn’t have great size for an NFL pass rusher.  But either did prospects like Jerry Hughes or Elvis Dumerville and they turned out to be pretty productive in the NFL.

If Eric Striker was an alien weapon of destruction he would be a Space Glider….gliding to your QB until STRIKER!  That’s a negative play!

Check out his highlights here!