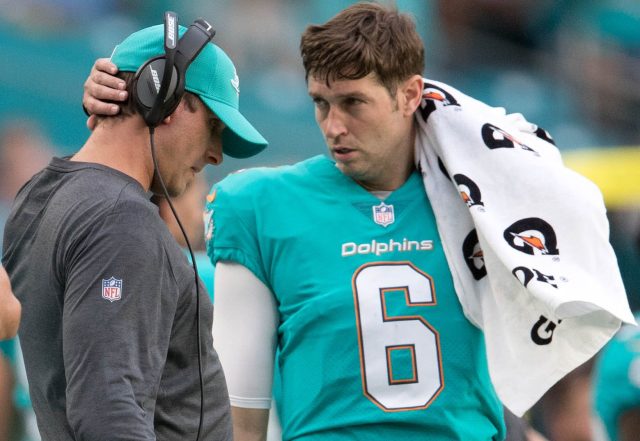 The Tennessee Titans are coming to town, and luckily for the Miami Dolphins, we’re catching a little break.  Titans QB Marcus Mariota suffered a hamstring strain last week in their blowout loss to the Texans.  In Mariota’s place will be veteran QB Matt Cassel.  I think it’s going to take more than a break for us to beat the Titans.  It’s not that the Titans are unbeatable, because they got drubbed 57-14 last week.  The problem is, the guy on left in the picture above, has to figure out how to get the guy on the right to perform better, and start putting points on the board. Would you believe Cutler is completing 66.7% of his passes?  OK, would you believe his average yards per attempt is is a paltry 5.8YPA?  The majority of Cutler’s career, that number is 7 or better, with a couple of seasons where he had 6.6 and 6.8.  Under 6 yards per attempt is pathetic.  We have been unable to move the ball downfield through our passing game, and as of late, the running game too.  Gase has a lot of work to do. 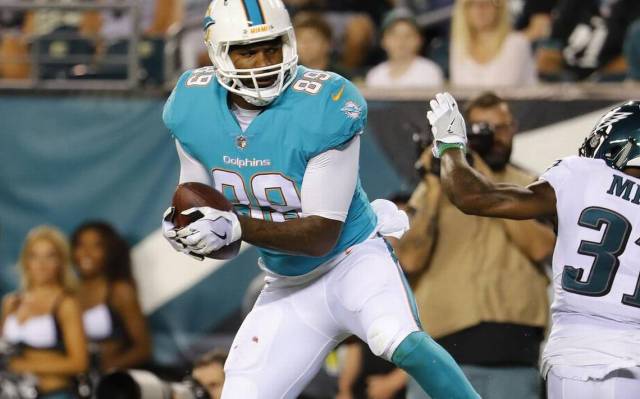 Why is this guy still starting?  The only answer I can come up with is it’s only our 4th game.  That’s it.  He was so wide open last week against the Saints, not a player anywhere near him when Julius Thomas made his play of the year, a 23 yard reception where he was, lack of a better description, completely ignored by the Saints defense.  I don’t have game film, but this guy can’t block.  He’s not helping Jay Ajayi or Jay Cutler lining up as a TE.  I recall MarQueis Gray being a pretty impressive blocker, and not too shabby catching the ball either.  We all know Fasano can block, so how about jump starting this offense with a tandem of Gray and Fasano in a 2 TE set?  It’s been painful to watch Ajayi get the handoff, and always having to try to beat a defender just to get to the damn line of scrimmage.  Far too often this has been the case, and of course that’s not all on Julius Thomas, or any one OL, it’s all of them.  This O-line needs to find their nasty fast before the season slips too far away.

With Matt Cassel starting at QB, DeMarco Murray and Derrick Henry will be shouldering the load against us this Sunday for our 1st true Home game at The Rock.  Last week Cordrea Tankersely gave us a glimmer of a pretty solid YOUNG CB tandem, with he and Xavien Howard.  I’m a fan of Byron Maxwell, despite being much maligned by our fanbase, and I’ll be honest, he didn’t play well so far this season.  He started slow last year too, but ended up playing very well for us down the stretch.  His services may still be needed, so don’t hate on him too much.  Nate Allen is exactly what I expected him to be, underwhelming.  He’s done, but he’s our guy until week 9, when newly signed S T.J. McDonald comes off his 8 game suspension, which incidentally got pushed up a week thanks to our friend Hurricane Irma.

I think it’s going to be a physical game, the Titans have fashioned themselves as a physical team, with an aggressive run blocking O-line, and the  2 horses in Murray and Henry to carry the rock.  The Titans targeted their man in the 2016 draft, and with Tunsil still available at #8, the Titans nabbed OT Jack Conklin.  Conklin is not the physical specimen Laremy Tunsil is, but that guy is all heart and desire.  He’s a very physical player who never lets up.  The Titans O-line, especially their run blocking is their strength on offense.  LT Taylor Lewan and RT Jack Conklin are the bookends, with Quinton Spain at LG, Ben Jones at C and Josh Kline at RG.    This is an old school team, coached by and old school HC, Mike Mularkey, along with some old school assistants, like Terry Robiskie and Dick LeBeau.

Speaking of Dick LeBeau, he’s been around longer than NFL films has.  Not really, but he’s been a defensive coach in the NFL for 29 years.  The Titans have a pretty good front 7, base 3-4 defense.  DaQuan and Jurrel Casey are the ends, with Sylvester Williams at the nose. Big, physical LB’s are the thing here, with Derrick Morgan, Wesley Woodyard, Avery Williamson and of course, Brian Orakpo.  Logan Ryan (from NE) and LeShaun Sims are the corners, along with Jonathan Cyprien (SS) and Kevin Byard (FS).  This season so far, even before last weeks blowout at the hands of the Texans, this defense has not been getting it done.  They have allowed 126 points in 4 games, which puts them at 30th in the NFL.  Of course, this week, we face them after a blowout loss, so LeBeau will have these guys angry and riled up. 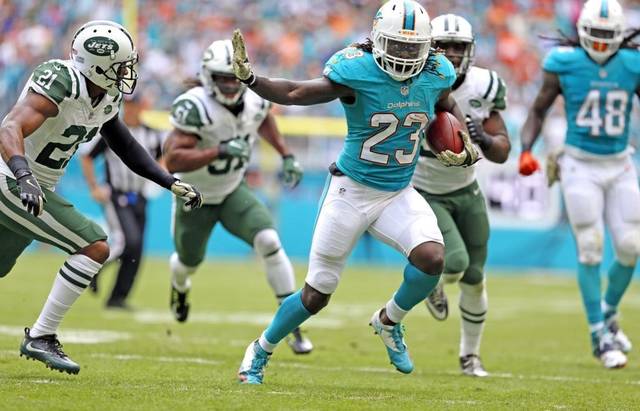 What we need is Ajayi running in space.  He’s got to have some creases to run through, and lately, they haven’t been there.  I think we all know Ajayi is the key to getting this offense going, and of course, opposing defenses do as well, which is why they have been focused on shutting him down at all costs, and it’s working.  It seems we can’t rely on Jay Cutler to throw the rock all over the yard, hitting bombs to Parker, Stills and Grant.  Maybe someday, but it hasn’t materialized yet.  Get Ajayi going, and work it from there.