Since many Dolphins fans seem super concerned with the depth we currently have at the running back position, and since FA precedes the draft, let’s take a look at who is available that can help our team, and make it less urgent to have to draft 1 or 2.  Right now we have Kenyan Drake and whatever.  No offense to Senorise Perry or De’Veon Smith, but neither of those are likely to be on a 46 man roster on game day next season, unless we have injuries.  I think we can all pretty much agree that Adam Gase runs at minimum a 2 back system, and I’d even say he would like 3 backs he can count on.

In Denver as the OC in 2013, he used the trio of Knowshon Moreno, Montee Ball and Ronnie Hillman, basically to 2:1 ratio down the line.  Moreno had 241 carries, Ball had  120, and Hillman had 55 carries.  The following season, it was C.J. Anderson who was the lead back with 179 carries, then Ronnie Hillman with 106 and Montee Ball with 55.  Not quite a 2:1 ratio, but close enough that you know who the featured back is.

In 2015, Gase went to Chicago as OC for the Bears.  A similar pattern existed there, with Matt Forte getting the majority of the carries, 218, and then Jeremy Langford a closer 2nd with 148, and then Ka’Deem Carey with 43 rushing attempts.  While the top 2 backs shared a little more evenly, it’s obvious who the feature back is, and regardless of how good the 2 backs are, he still likes to use a 3rd back.

As HC with the Dolphins, Gase leaned heavily on his newfound success story, 2015 5th RD draft pick.  To be fair, Arian Foster went down early in the season, and Gase was kind of pushed into going with Ajayi.  Drake had always been a complimentary back at Alabama.  His Freshman season, he was 3rd on the depth chart behind Eddie Lacy and T.J. Yeldon.  In 2013, Drake was a distant 2nd to T.J. Yeldon, but far ahead of Derrick Henry.  In 2014, due to injuries, it was Yeldon and Henry.  In ’15 for Alabama, it was the Derrick Henry show, with a drop of Kenyan Drake sprinkled in, Henry carried 395 times, Drake has a meager 77 carries.  In fact, the most carries Drake ever had in college was 92.  On the other hand, Ajayi was a workhorse at Boise St. and the only reason he was there for MIA in the 5th RD in 2015 was due to concern on deteriorating knee issues.

So now that I’ve made it clear Gase has never relied solely on one feature running back, and prefers to spread carries around, who’s out there for us?  For sake of reason, I’m not including any of the ridiculous salaried players like Le’Veon Bell, but more reasonable alternatives.

Forget that Lewis was a NE Patriot, he’d be a good fit for what we like here.  He’s a very good receiver out of the backfield, and he would be a good 2nd option for Drake.  He proved he could carry the ball when the pats were beset with injuries to Mike Gillislee, Rex Burkhead and James White, accounting for over 150 multipurpose yards in game 15, and over 130 in the final game.    Lewis finished the season with 180 rushes and 896 yards and 6 rushing TD’s.  He also caught 32 passes for 214 yards and 3 TD’s, giving him 9 total TD’s.  Picking up Lewis also takes a player away from NE, and while we know they will replace him, it still stings for a moment.  Oh, and Lewis was born in Brooklyn, he’s my goombah, hey fuggetaboutit!  Spotrac says $5M per for Lewis

We all know Damien Williams, he’s a known quantity, playing here in MIA for the last 4 years.  We also know Adam Gase likes Damien Williams, and that Damien Williams likes Adam Gase.  Regardless of those things, Williams has never had more than 70 touches in a season, last year was his largest total, 46 rushes and 20 receptions.  He can also return kicks and punts, and he’s a solid ST’s player, but he’s never been a big part of the offense.  That should keep his salary down, which makes him affordable to everyone, and it’s possible if a team was willing to give him an opportunity for playing time, he might take it.  My guess is, Damien will come back to MIA as long as we’re fair to him.  Even if we do bring Williams back, is anyone here confident going into the draft with just Drake and Williams?  Will we still need to spend a 2nd-4th RD pick on a RB?  Maybe a 4th, but I believe we won’t need to go any higher. 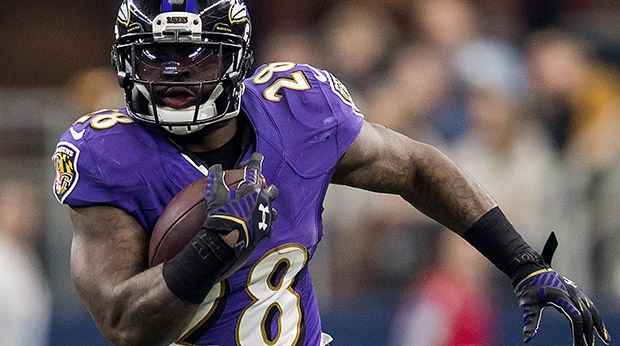 West had a disappointing 2017 season with injuries, none major, but nonetheless was irrelevant to the Ravens, while Alex Collins had a coming out party.  in 2016, West was the Ravens leading rusher with 774 yards on 193 carries and 5 TD’s.  West also added 34 receptions for 236 yards and 1 TD. West feel out of favor with a nagging calf injury last season, which should lower his value for FA.  He’s more of the bowling ball type that some here desire, more of a banger between the tackles, more of a thunder to Drake’s lightning. 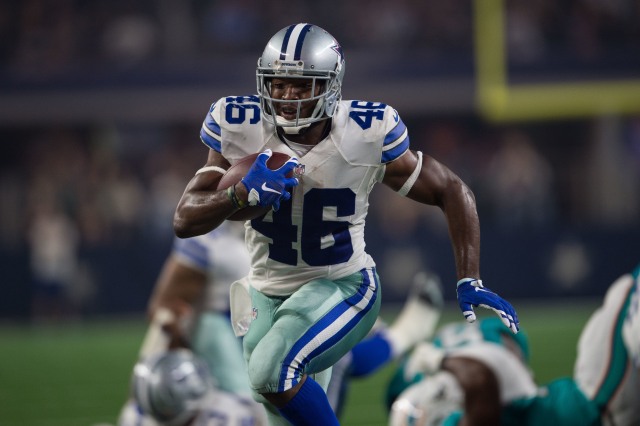 Morris has been the feature back in the past, so when looking at a back to add to your stable, he’s the one guy you can count on to step up and take over as the lead back if necessary.    Undrafted out of FAU, Morris was signed by the Redskins in 2012, and had his most impressive season in the NFL.  Morris carried 335 times for 1613 yards and 13 TD’s.  The thing is, he’s steadily declined since 2012, going to down to a very respectable 1275 yards rushing in ’13, then 1074 yards, then 751 yards, then out of the picture on the Ezekiel Elliott led Cowboys.  It’s obvious why Morris has been relegated to watching football from the bench with Ezekiel Elliot as the feature back.  The good thing for Morris is he probably has fresh legs after 2 quiet seasons in Dallas, after 4 grueling seasons in Washington.  Morris is a scrapper, another wrecking ball that can run in between the tackles.  Morris’ last contract with the Cowboys was a 2YR/$3.5M contract.  Despite Morris being 29, like I mentioned, he should have fresh legs, so I’d definitely consider Morris.  He might make some forget that Ajayi guy.

Another guy Dolphins fan know.  Some of us were sorry to see him go, and Darkwa finally got his chance last with the new York Giants last season.  Darkwa carried 171 times for 751 yards and 5 TD’s.  This was by far his biggest workload, more than quadrupling and other season.  Things worked out well for Darkwa last year, the Giants were in a shambles, injuries to Paul Perkins gave him his shot, and he made the most of it, on what was an awful season for the Jints.  He should be affordable, despite his breakout season last year, and he proved he can be counted on for significant carries if necessary.

Last, but most definitely NOT least, is Jerick McKinnon.  I think McKinnon would be a perfect fit for how we use RB’s, but I do believe McKinnon would like to finally be the feature back, after a couple of years of toiling behind Adrian Peterson, and then last year, initially buried behind by rookie sensation Dalvin Cook and then FA pickup Latavius Murray.   McKinnon is a very shifty, quick RB with excellent receiving skills.  Last season, McKinnon showed that dual threat ability, rushing 150 times for 570 yards and 3 TD’s, along with 51 receptions for 421 yards and 2 TD’s.  Spotrac has McKinnon slated for $4M per year, which is doable.  The question is, will he come to MIA without being given a chance to be the starter?  I’d feel pretty good with McKinnon in tow before the draft, probably as much with him as Alfred Morris or Dion Lewis.  It would definitely push RB back down in priority in a deep draft at RB.

There are other free agents besides Le’Veon Bell that I don’t believe we can be in the running for, nor should we be such as Carlos Hyde and Isaiah Crowell.  I think their salaries will be prohibitive for signing here.  Other notable free agent RB’s are LeGarrette Blount, Jamal Charles, C.J. Spiller, Darren Sproles, and Eddie Lacy, all whom are either too old, or just don’t fit.  Any suggestions, let me hear it!