Posted on April 8, 2015 by finsmob unleashed

By late 1972 the Jets-Dolphins rivalry already had become one of the most intense, bitter, outrageous rivalries in the history of professional football.  The players for the two different squads genuinely disliked each other.  The fans of the two teams absolutely despised each other.  A “combat zone mentality” definitely existed in the stadium when these two teams met.  It was NOT an exaggeration to say “the best hits were in the stands!” 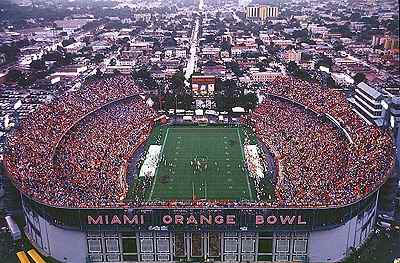 Conditions were especially nasty in the historic Orange Bowl.  Large numbers of ex-New Yorkers moved to South Florida during the 1960’s and 1970’s.  Many of these transplanted New Yorkers were hard core Jet fans, or became bandwagon Jet fans when the Jets shocked the world by winning Super Bowl III.  The Dolphins hosted the Jets in week #2 of their inaugural season in 1966.  To nearly everyone’s surprise, Miami nearly upset New York before falling 19-14.  Jets fans, who may have outnumbered Dolphin fans at that game, celebrated their unimpressive win over an expansion team.  There were fights, bottles thrown, and more than a few arrests.  News of the misdeeds spread throughout the region.  “Next time, I’ll be ready for those jerks,” said an acquaintance of mine.  Others made their own plans for “next time.”  Culture clash was a major cause of this mutual dislike by fans of the two teams.  In the 60’s, Dolphin fans were viewed as Southern Baptists, rednecks, ultra-conservative, dentally challenged and heavy drinkers by their Jet adversaries.  Conversely, Some Dolphin fans viewed Jet fans as Jewish, liberal, obnoxious snooty and heavy drinkers.  (Note that fans of BOTH teams said,”the other guys drink too much.”)  Quite often, these characterizations were prejudicial and just plain wrong.  But there’s no doubting the fact that these perceptions fueled an intense dislike among fans of the two teams.  They REALLY hated each other!

New York won the first 8 meetings between the two rivals.  After their initial 19-14 loss, the Dolphins suffered a series of embarrassing defeats to Joe Namath and the Jets: 30-13; 29-7; 33-14; 35-17; and 31-7.  Most Miami fans had headed home by the 4th quarter of these games.  Those who remained were subjected to incredible abuse by New York fans.  Fights were common, especially in the cheap seats in the upper deck.  It was during this time that a major ruckus in the upper deck deteriorated to the point that a large cooler was tossed over the edge and landed a few rows away from me in the lower deck!  I actually considered wearing a helmet to the next Jets-Dolphins game!  Dolphins’ head coach George Wilson never defeated the Jets in his four seasons at the helm.  His successor, Don Shula, promised big changes immediately.  Shula delivered.  His first Dolphin team beat the Jets twice in 1970.  In 1971, each team won at the other’s stadium.  From 1972 through 1977 Shula’s Dolphins took control of the rivalry, winning 11 0f 12 contests against the Jets.  Since then, there have been many ebbs and flows in this series.  But one thing has NEVER changed.  These two franchises still HATE each other!

The November 12, 1972, game between the Jets and the Dolphins was one of the most important games in this series.  Since losing to the Bob Griese led Dolphins in week #4, the Jets had gone 4-1.  A win over the Dolphins would keep New York’s playoff hopes alive.  More importantly, a win would put the Jets in the books as the team that ruined Miami’s dreams of a PERFECT SEASON.  Many observors predicted a Jets victory in this game.  Halfback Emerson Boozer was leading the NFL in touchdowns.  Rookie fullback John Riggins would

end the season with almost 1,000 yards rushing.  And Joe Namath was leading the NFL in touchdown passes.  Before years’ end, ace wide receiver Don Maynard would surpass Raymond Berry and become pro football’s all-time leading pass receiver.  Eventually, Riggins, Namath and Maynard would all be enshrined in the Pro Football Hall of Fame.  A week earlier, the Jets destroyed the Buffalo Bills 40-3.  And most Jet players believed Miami was a weaker team with Earl Morrall at quarterback.  Morrall, for his part, avoided his long simmering feud with Namath.  To Morrall, Namath’s playboy wild sex image contradicted the traditional American standard of settling down, getting married and raising a family.  “Namath’s lifestyle is NOT my lifestyle,” said Morrall a few days before Super Bowl III in 1969.

Sunday, Nov. 9, 1972, the stage was set for history.  Requests for media passes to cover this game were at an all-time high.  Alligator Alley, from Ft. Lauderdale to Naples (about a 120 miles) was packed with Dolfans driving across the state to the west coast to see the game on TV.  Similarly, I-95 north was jammed with fans heading north to Fort Pierce (about 125 miles away from Miami) to avoid the TV blackout.  After the 1972 season  the NFL changed its blackout policy and allowed games to be shown locally if sold out 72 hours  before kick-off.  But, in ’72, ALL games, even those that were sold out, were locally blacked-out, including the Super Bowl.  80,010 people were ready for the biggest game of the year in the historic Orange Bowl.  Most fans already were “well lubricated” by the 1:00 PM kick-off.  A thunderous roar greeted the Dolphins as they ran on to the field from the west end zone.  A sign said “80,000 reasons why the Jets can’t win!”  Indeed, the home field advantage in the Orange Bowl was the greatest in the history of professional football!

The upper deck literally swayed as Miami’s Garo Yepremian approached the football for the kick-off!  It was “Game On!”  About one minute intothe game, Namath threw a pass intended for Don Maynard.  Dick Anderson stepped in front of Maynard and returned the interception all the way to the Jets’ 33 as the home crowd went crazy!  Larry Csonka garnered 14 yards on a run and a pass reception.  Morris carried twice for 10 yards.  Then Morrall found reliable Howard Twilley with a 9-yard touchdown strike and the Dolphins had a quick 7-0 lead.  The Jets responded immediately.  Namath led an up-tempo drive that took New York to Miami’s 1-yard line.  From there, John Riggins roared into the end zone tying the game at 7-7.  After a Mercury Morris fumble, the Jets took over.  Namath tossed a gorgeous 29-yard TD pass to speedy tight end Richard Caster and the Jets had a 14-7 advantage early in the second stanza.  Midway through the period, New York’s Bobby Howfield connected on a 33-yard field goal, extending the Jets’ lead to 17-7.  Thoughts of obnoxious Jet fans celebrating the end of Miami’s perfect season were dancing in my mind.

Earl Morrall would not let this game get out of hand.  Again, he sought out reliable Howard Twilley.  From Miami’s 20, Morrall connected with Twilley for 22 yards and a first down,  The Jets continued to double cover Paul Warfield so Morrall threw again to Twilley, this time for 44 yards!  Mercury Morris’ 1-yard TD plunge brought Miami back to a 17-14 deficit at halftime, to the delight of the Orange Bowl faithful.

Halftime TV commentators noted that the Jets controlled the game for most of the first half.  Namath had found success against the “No

Name Defense.”  Unless Morrall had a really big second half, the Dolphins likely would lose.  Miami took the second half kick-off and moved steadily into New York territory.  Earl Morrall stepped back to pass, but found no one open.  He rolled left, then bolted downfirld near the sidelines.  Mercury Morris said “I was shocked!  I didn’t want anyone messing him up!”  31 yards later, Morrall stood in the Jets end zone having completed THE LONGEST MIAMI RUN FOR A TOUCHDOWN at that point in the season!  It was 21-17, Miami, thanks to Morrall’s 38-year old legs.  The lead was short lived.  Namath brought the Jets back on an 80-yard drive, meeting little resistance from the “No Name Defense.”  His four yard TD pass to reserve player Wayne Stewart put the Jets back on top 24-21 at the end of the 3rd quarter.  Only one quarter separated Miami from their first defeat of the season.  The Jets stuffed Miami’s first drive of the final quarter.  Dick Anderson, pressed into punting when Larry Seiple got hurt, kicked the ball deepinto Jets territory.  A few plays later, “Captain Crunch,” Mike Kolen, caused Jets runner Cliff McClain to fumble.  Dick Anderson recovered the loose ball at New York’s 27!  The “No Names” had come through when

it mattered the most.  Two Larry Csonka carries produced 9 yards.  Morrall scampered for 4 more yards and a first down at the 14.  Everyone was standing!  From there, Mercury Morris picked his way through the Jets defense, scoring the go-ahead touchdown!  The Orange Bowl erupted with an ear-splitting celebration!  As Yepremian was kicking the extra point, defensive coach Bill Arnsparger was huddled with key members of the “No Name Defense.”  Adjustments were made.  Assignments were altered.  Arnsparger was determined to protect this 28-24 Miami lead.  The new defensive strategies worked.  The “No Names” completely shut down New York’s high octane offense for the last 11 minutes of the game.  Bodies were being dragged-off the field.  Kolen and Buoniconti hit everything that moved! Even a side judge got accidentally clipped by a Dolphin defender.  Namath was running for his life as he tried in vain to rally his team.  “It was a war – – – a war,” said cornerback Steve Tannen of the Jets.  By games’ end, 9 New York Jets had been knocked out of the game!  And the Jets had been knocked out of the playoffs!  Dolphin fans roared as the final seconds ticked off the clock!!  –3 –2 –1 –BOOM!  Firecrackers and foghorns exploded around the biggest game of the year in front of a national TV audience and 80,010 delirious fans!  Horns could be heard blaring outside the stadium.  The celebration had begun!

On the day, Namath passed for 175 yards and two touchdowns.  John Riggins ran for 83 yards and a touchdown.  But it wasn’t enough.  Miami’s ground attack produced 214 yards and three touchdowns.  Morrall hit Howard Twilley with a TD pass.  Dick Anderson not only filled-in as an emergency punter; he also came uo with two crucial takeaways, the final one setting up the winning score.  When it mattered most, the “No Name Defense” stepped-up and preserved this incredibly important win!