In 1946 a new professional football league, the All-American Football Conference, was formed.  The eight team league included the Buffalo Bills, Brooklyn Dodgers, Chicago Rockets, Los Angeles Dons, Miami Seahawks, New York Yankees, San Francisco ’49ers and the Cleveland Browns.  The Browns, who went 12-2 during the regular season, edged the New York Yankees 14-9 in the first AAFC title game.  1947 was a virtual repeat of the ’46 season.  The Browns went 12-1-1 and again defeated the football Yankees 14-3 for their

second straight AAFC championship.  This Cleveland franchise, owned by Arthur McBride, chose the nickname “Browns” as a tribute to their extremely popular head coach Paul Brown.  Brown, a true innovator, was, by the mid-50’s, perhaps the best known and most respected football coach on the planet.  Many long term observors of the National Football League believe Paul Brown, Don Shula, Tom Landry and Vince Lombardi represent the Mount Rushmore of NFL coaches.  In 1948 Paul Brown’s team continued to dominate the AAFC.  Cleveland won all 14 regular season games.  In the title game they crushed Buffalo 49-7.  However, the Browns received very little credit for their undefeated season because the quality of most of the teams in the league was well below NFL standards.  In 1949, the 9-1-2 Browns won their fourth straight AAFC title 21-7 over San Francisco.  The league folded after this season with the Browns, ’49ers, and the Baltimore Colts (formerly the Miami Seahawks) moving on to the NFL.  As a sidelight to Paul Brown’s career, he coached the Ohio State Buckeyes for one season in 1940.  They won college football’s national championship.  Later, after leaving the Browns, he helped form the expansion Cincinnati Bengals, serving as their head coach during the early years of that franchise.  The home stadium of the Bengals is known as Paul Brown Stadium.) 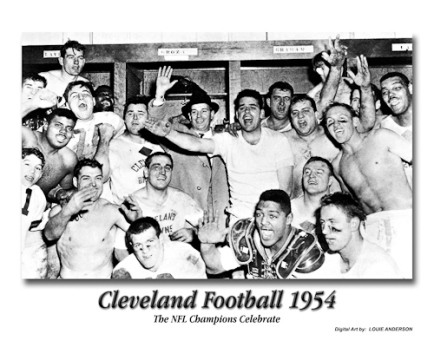 The Browns continued their successful ways their first year in the NFL.  Future Hall of Fame quarterback Otto Graham led the Browns to a 30-28 victory over the Los Angeles Rams in the NFL Championship Game.  Before retiring, Graham would lead the Browns to five more title games and two more NFL titles in 1954 and 1955.  When the ’55 Browns advanced to, and won, the ’55 title, it marked the tenth consecutive season the Browns had advanced to a league championship game – – – – a record that has never been approached or

broken!!  In 1957 the Browns drafted legendary Syracuse running back Jim Brown.  In his 9-year Hall of Fame career, Brown won the NFL rushing crown 8 times and came in second the other time to Jim Taylor.  In 1964, Brown led Cleveland to its fourth NFL title when they defeated the Colts 27-0.  That win marked the city of Cleveland’s last championship IN ANY MAJOR SPORT.  After the 1965 season, Jim Brown, at the height of his career, retired.  He signed a lucrative contract to star in the movie “The Dirty Dozen,” a war movie featuring stars like Lee Marvin, Ernest Borgnine and Charles Bronson.  Brown went on to star in many more Hollywood movies in a career he claims earned him many times his total NFL salary.

The 1972 Cleveland Browns started the season 2-3.  Then, they got red hot, winning 8 of their last 9 games.  Quarterback Mike Phipps had a solid season, displaying

strong leadership skills.  In 1970 the Miami Dolphins traded a first round draft pick to Cleveland for all-pro wide receiver Paul Warfield.  The Browns used that pick to draft Phipps.  Phipps’ favorite targets during the ’72 season included wide receivers Frank Pitts and Fair Hooker and tight end Milt Morin.  The offensive line was anchored by future Hall of Famer Gene Hickerson.  Future Hall of Fame running back Leroy Kelly and his running partner, Bo Scott, were a formidable duo.  On the last weekend of the regular season, Cleveland defeated the previously eliminated Jets 26-10 to clinch a wild-card playoff spot.  Most observers expected the Browns-Dolphins playoff game to be close and competitive.  IT WAS ALL OF THAT!!

80,010 fans crammed into the historic Orange Bowl for this much anticipated match-up of the two hottest teams in the National Football League.  In the first quarter Cleveland prepared to punt for the second time.  This time, Miami rushed 10 players instead of the usual 9.  Cleveland was not prepared for this change.  Charlie Babb broke through and cleanly blocked Don Cockroft’s punt!  Babb picked-up the ball at the 7 and bounced into the end zone for an early 7-0 Miami lead.  For the third consecutive series, the “No Name Defense” throttled Cleveland’s offense.  After another Cleveland punt, Miami drove from their own 16 to the Browns’ 33 yard line.  One of the biggest plays was an end-around to Paul Warfield good for a 21 yard gain.  Yepremian’s 40 yard field goal gave Miami a 10-0 lead after one quarter.

The second quarter was dominated by the two defenses.  But, just before halftime, Miami mounted a drive.  Yepremian booted a chip shot field goal to make it 13-0 as the clock struck zero.  Unfortunately, Miami was flagged for a penalty which negated the field goal.  Miami had squandered 3 important points. It remained 10-0 at the half.  Cleveland roared out on the field with a show of emotion at the start of the third quarter.  A five yard bootleg run for a touchdown by Phipps narrowed the Miami lead to 10-7.  Early in the fourth quarter, Garo Yepremian converted a clutch 46 yard field goal to expand Miami’s lead to 13-7.  The Browns responded in a big way.  Phipps drove Cleveland all the way down to Miami’s 27 yard line.  Then, Phipps stepped back and found receiver Fair Hooker wide open!  Phipps’ pass was right on the money and the Dolphins were in DEEP TROUBLE trailinf 14-13 midway through the final quarter!  This Miami Dolphins team was too good to let the dream of a PERFECT SEASON die in the historic Orange Bowl.  Dolphin fans were roaring and waving their “white hankies” as the Dolphins’ offense began their drive from the 20 yard line with just 6:49 left on the clock.

Morrall, feeding off of the crowds’ emotion, threw a perfect 15 yard pass to Paul Warfield.  Mercury Morris ran twice for a total of 10 yards.  There were less than 5 minutes left on the

clock!  Paul Warfield was having his best game of the season against the team that had traded him away.  Morrall decided to go to his red hot receiver.  Morrall arched a deep pass down field to Warfield who juggled the ball, then brought it in at the Cleveland Browns 20!!  The Orange Bowl exploded as Dolphin fans screamed their lungs out!  The clock was ticking.  Then, it stopped.  Fans in the lower and upper decks of the west end zone jumped up-and-down as the public address system played, and then replayed, the Miami Dolphins fight song during a Browns’ time out!  The noise was absolutely unbelievable!!  On the next play Mercury Morris ran for only 2 yards.  Then, Morrall passed to (who else?) Paul Warfield.  Warfield could not catch the ball because Browns’ l 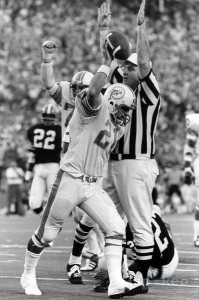 inebacker Bill Andrews had his arms wrapped around Miami’s all-pro receiver before the pass arrived.  The interference call gave Miami a FIRST AND GOAL at the 8!!  Again, the Miami crowd went absolutely berserk!!  Some fans actually had to cover their ears as the deafening roar and the constant celebration actually caused the upper deck to sway!!  This was the historic Orange Bowl AT ITS ABSOLUTE BEST!!  Visiting teams had virtually NO CHANCE under these conditions AND THEY KNEW IT!!  The Orange Bowl was the greatest home field advantage in NFL history, especially in moments like this!!  Earlier in the game, Jim Kiick had lost the ball on a rare fumble.  Morrall knew Kiick wanted to make amends.  So, in the huddle, Morrall called Kiick’s number.  Norm Evans and Bob Kuechenberg opened up a nice hole and Kiick burst through to SCORE THE GO AHEAD TOUCHDOWN!! –The Dolphins had a 20-14 lead!  Again, the Orange Bowl exploded with an ear-splitting celebration!!

There was still time for a Browns’ miracle comeback.  With 1:15 to go, Cleveland was at the Miami 34 yard line.  Phipps spotted tight end Milt Morin down the field.  But Doug Swift stepped in front of Morin and registered the Dolphins’ FIFTH and most important interception of the game!  The “No Name Defense” had saved the day!  It was NOT a convincing win for Miami.  But the Dolphins had found a way to win.  And the 80,010 exhausted and happy fans who left the Orange Bowl that day could smile in the knowledge that “their boys” had gone 9-0 at home in 1972.  The Dolphins eventually would go on to win an NFL record 34 consecutive home games in the historic Orange Bowl by the end of the 1974 season.  It was a home field advantage unlike any other!

Next up: the Dolphins (even though they had a better record) would have to travel to Pittsburgh to play the AFC Championship Game.  The Steelers, in an incredible stroke of luck, scored with just 22 seconds left when Oakland’s defense deflected a desperate fourth down heave by Terry Bradshaw to Franco Harris who caught the ball at his shoe tops and raced for the winning touchdown on a play forever known as the “IMMACULATE RECEPTION!”