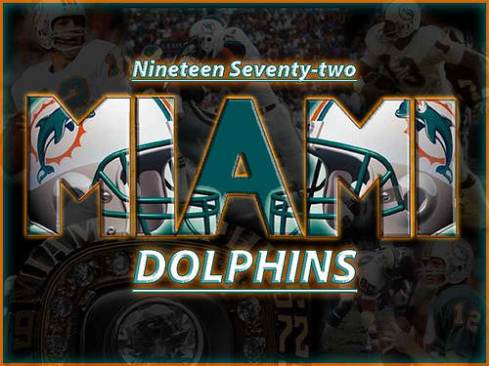 September 17 was the day the Miami Dolphins played their first game in the 1972 regular season.  It’s fair to say not one single person was thinking about a PERFECT SEASON.  Yet, by December 16, in the historic Orange Bowl, ABSOLUTE PERFECTION was on the minds of everyone.  The 80,010 ticket holders who were at the stadium, and the many millions who were watching this saturday afternoon broadcast were all thinking the same thing: CAN THEY DO IT?  It had been a truly amazing journey. On a scorching opening day in Kansas City the underdog Dolphins rolled to an impressive 17-0 halftime lead on their way to a 20-10 win over the Chiefs. The following week, Miami blew out Houston 34-14.  Then, at Minnesota, the underdog Dolphins trailed 14-6 well into the fourth quarter.  A booming 51-yard Yepremian field goal was followed by a last gasp Griese to Mandich touchdown pass that saved Miami’s Perfect Season with a 16-14 win.

Following a 27-17 win at Shea Stadium over the hated Jets, Miami had to suffer the shock of losing Bob Griese in a 24-10 win over San Diego.  Calm, cool, Earl Morrall would prove he was much more than an ordinary back-up quarterback.  In week #6, the Dolphins barely escaped with a 24-23 nail biter over the Bills.  Weeks 7 and 8 would bring relatively easier wins over Baltimore and Buffalo.  Week #9 would see the Don of Miami win his 100th game in very convincing fashion with a 52-0 blowout over the Patriots.

A heart-pounding classic followed on week 10 when Earl Morrall and the Dolphins came from behind in the final quarter to edge the hated Jets 28-24 in an ultra-noisy Orange Bowl.  Routine victories over St. Louis and New England set the stage for a match-up against the very strong New York Giants in Yankee Stadium on week 13.  The “No Name Defense” forced SIX New York turnovers on the way to a 23-13 road victory.  The 1972 Miami Dolphins were now 13-0.  A perfect regular season was now within their grasp.  Where else to play this game other than the historic Orange Bowl?

The Baltimore Colts were the only thing standing between the Dolphins and a 14-0 perfect regular season.  Since losing to Miami in week 7, the Colts had gone 4-2, including a 35-7 win over Buffalo.  Aging John Unitas had been replaced by QB Marty Domres.  And the young Colts’ defense had shown signs of improvement.  But no one was going to stop the Dolphins today.

Miami’s Chalie Leigh returned the opening kickoff all the way to Miami’s 45 yard line.  Strong runs by Csonka and Morris 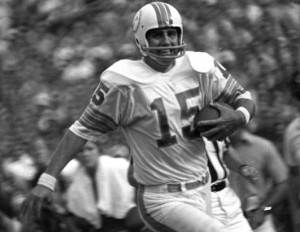 got the Dolphins well into Colts’ territory.  Yepremian’s 40 yard field goal made the score 3-0 after one quarter.  Miami shut out the Colts 23-0 when they played in week 7.  The “No Name Defense” totally shut down Baltimore’s offense.  Young QB Marty Domres was having no luck this time, either.  Then, in the second quarter, an injury sent him to the sidelines.  Meanwhile, Morrall had engineered another successful drive.  Starting from Miami’s 20, Morrall patiently worked the running game spiced with an occasional pass.  A 21-yard dart to reliable Howard Twilley got Miami in scoring position.  From the 15, Morrall’s pass was intercepted!  Somehow, the ball was jarred loose and Twilley fell on it for the Dolphins!  A short pass, Morrall to Paul Warfield, produced a touchdown and a 10-0 Dolphins’ lead.

Unitas, subbing for the injured Domres, failed to ignite the Baltimore offense.  Miami maintained a 10-0 lead at halftime.  As the game progressed it was obvious Shula and his staff 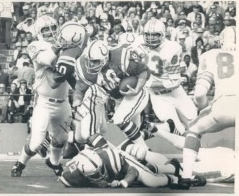 wanted to set the all-time NFL record for most yards gained rushing by a single team in a season.  Early in the third quarter the new record was set and the game was stopped.  Mr. Dick Gallagher, Director of the Pro Football Hall of Fame in Canton, Ohio, was given the ball that was used to break the 1935 NFL team rushing record set by the Detroit Lions.  Today, that ball sits on display at the Hall of Fame in Canton.  When this game was over,  the 1972 Miami Dolphins achieved 2960 yards rushing, 75 yards more than the old record!  And they had the honor of being the ONLY team in NFL history to have TWO  runners reach the 1,000 yard plateau in the same season (Csonka 1117 yards and Morris 1000 yards).

That little ceremony in the third quarter was one of the highlights of the second half.  Another occurred when Bob Griese made a cameo appearance in the final quarter.  He completed 2 of 3 passes.  Could Griese be ready for the playoffs?  Miami went on to register a 50-yard field goal by Yepremian in the third quarter and a 35 yard field goal in the final quarter.  For the second time this season, Miami had shut out the Colts, this time by a 16-0 score.  Head coach Don Shula presented the entire offensive line with a game ball to mark this historic day.  Tight ends Marv Fleming and Jim Mandich; Guards Larry Little and Bob Kuechenberg; tackles Norm Evans, Doug Crusan and Wayne Moore and center Jim Langer all were given game balls. Truly, this had been a total team effort!

Now it was on to the second season, the playoffs.  The pain of losing to Joe Namath and the Jets in Super Bowl III was still in Shula’s gut.  And the embarrassing 24-3 loss to Tom Landry’s Cowboys in last year’s Super Bowl was still fresh in Shula’s mind.  He knew there was only one way to overcome those memories – – – He HAD to WIN the Super Bowl!

Next up: the first 1972 playoff game against a tough and determined Cleveland Browns team.   The 1972 Miami Dolphins were now 14-0.